Potawatomi in the White House

After the 2020 election, Vice President Kamala Harris has gained notoriety as the first Black and Asian-American, as well as woman, to hold the position. However, Harris is not the first person of color to serve as the United States’ second in command. That title goes to Charles Curtis, a citizen of the Kaw Nation, who became the nation’s vice president in 1929 under President Herbert Hoover. Lesser known is Curtis’ Potawatomi lineage.

Curtis grew up in the Topeka, Kansas, area. Born in 1860 to Helene and Oran Curtis, he was a citizen of the Kaw Nation, but his maternal grandparents Julie (Gonvil) and Louis Pappan had ties to several tribes, including the Potawatomi.

According to family records, Curtis’ great-grandfather, Louis Gonvil — also spelled Gonville — was Potawatomi, French and Canadian, and his great-grandmother, Waisjasi was Kaw.

Curtis’ grandmother Julie received some acreage known as the Half-Breed Reservation No. Four along the Kansas (Kaw) River through an 1825 treaty. His grandfather Louis and great-uncles Joseph and Ahcan were Canadians from St. Louis, Missouri, with a family background in trade. The three brothers married three Gonvil sisters: Julie, Josette and Victoire.

The Pappan brothers erected a ferry business on the allotted property in 1842. It became an important crossing for those traveling west on the California and Oregon trails and proved successful for many years.

After his mother Helene passed away in 1863, Curtis’ grandmother Julie raised him for some time on the Kaw reservation. He learned French and Kansa before English, which helped Curtis fit in with other Kaw children.

During this time, tribes across Kansas experienced raids by other Native Americans, and the Kaw reservation was no exception. Curtis experienced this first hand, gaining notoriety for warning the people of Topeka of an active attack by the Cheyenne, traveling nearly 60 miles by foot to raise the alarm.

A biography published by the United States Senate said, “The incident also convinced his paternal grandparents, William and Permelia Curtis, that their grandson should be raised in the more ‘civilized’ atmosphere of Topeka rather than to return to the reservation.”

Curtis moved to Topeka and developed a hobby around horse racing, riding as a jockey from 1869 to 1876. His reputation as “The Indian Boy” spread across the Kansas circuit. His paternal grandfather passed away in 1873, and Curtis attempted to travel with his Pappan family from the Kansas Kaw reservation to present-day Oklahoma. However, his grandmother Julie encouraged him to stay in Kansas to get an education. He eventually graduated high school, studied law and became a member of the Kansas Bar Association in 1881. Three years later, Curtis became the Shawnee County attorney, which jump-started his political career.

In 1889, one vote separated Curtis from winning the nomination to fill an empty U.S. House of Representatives position. He worked to build up the public’s support, and in 1892, became an elected U.S. Representative. He served in the House from 1893 to 1907 and played a key role on the Committee on Indian Affairs. In 1898, he drafted his most notorious piece of legislation, the Curtis Act, which extended the Dawes Act of 1887 to apply to the Five Civilized Tribes of Indian Territory.

According to the Oklahoma Historical Society, “The Curtis Act dealt a blow to the governmental autonomy of the Five Tribes, but the act was merely the culmination of legislation designed to strip tribal governments of their authority and give it to Congress and/or the federal government. Ironically, Charles Curtis, himself of Indian blood, was responsible for the act that helped pave the way for the demise of the Indian nations and for the statehood of Oklahoma.”

“During his time in the Senate he became even more influential. He eventually worked his way up to Senate majority leader in 1925 where he was known for his ability to accomplish results for both progressives and conservatives,” according to a Visit Topeka blog post titled Charles Curtis: The moment a people gained representation.

Curtis put his name on the Republican ticket to run for president but lost. The winning nominee, Herbert Hoover, selected Curtis as his vice-presidential candidate. Curtis spent the election speaking across the country, and the duo won the 1928 general election.

He not only became the first Native American to hold vice presidential office, but he was also the first from the state of Kansas and west of the Mississippi River. Hoover and Curtis were not elected to a second term, and Curtis retired from public office. He remains today as the only Native American to serve as the vice president of the United States. 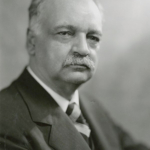