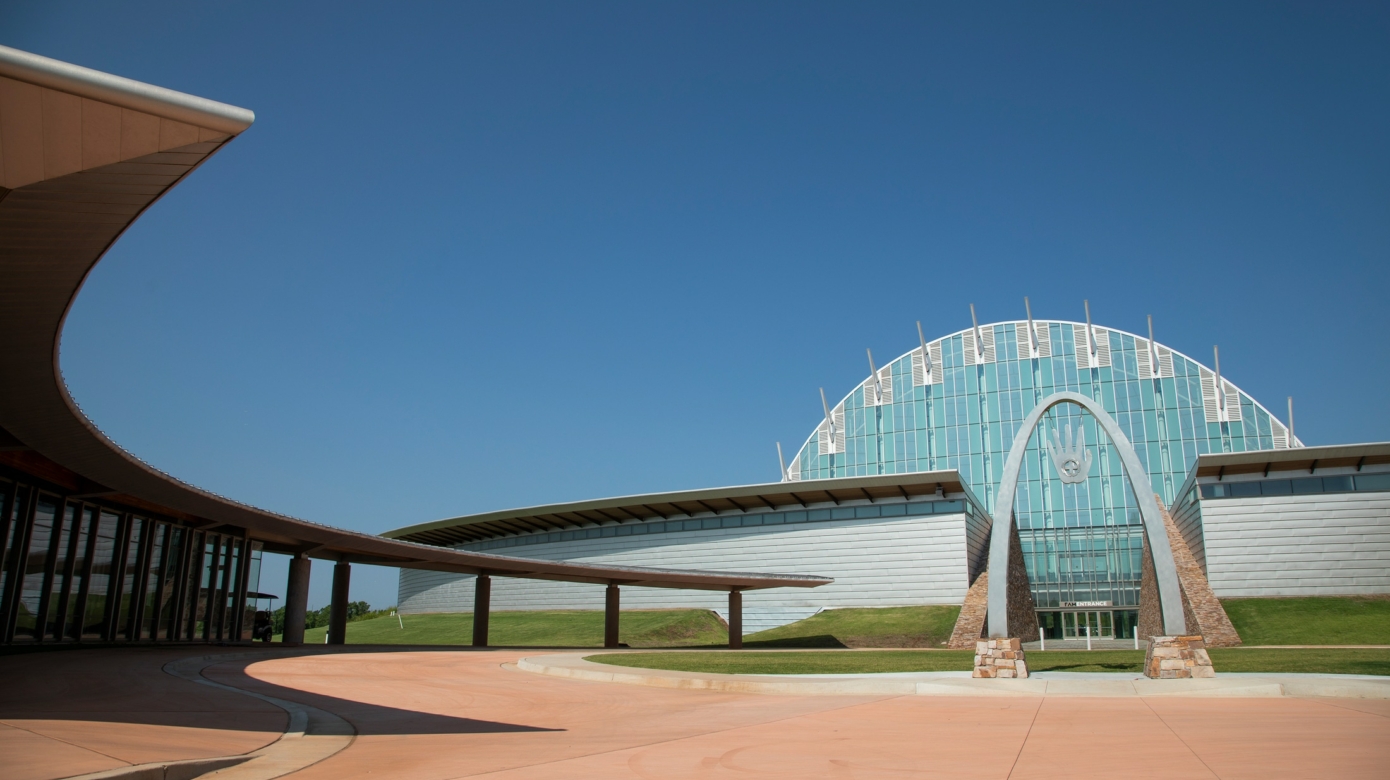 From the architecture to the exhibitions, the First Americans Museum near downtown Oklahoma City offers opportunities to learn about the 39 tribes in the state.

After decades of being hindered by inconsistent funding and bureaucratic red tape, the First Americans Museum in Oklahoma City opens to the public Sept. 18 and 19. The weekend includes tours, demonstrations, poetry readings, fashion shows, shopping, family activities and more. The staff and volunteers’ excitement shows their dedication to the project, which they look forward to sharing with the public.

“We want to set the right perspective and tone for opening weekend because it really is a true celebration of how far we’ve come and that the museum is finally open,” said Ginny Underwood, FAM’s marketing and communications manager.

Citizen Potawatomi Nation employee and Curley family descendant Kendra Lowden volunteered to assist the museum opening weekend. She has waited more than a decade for the opportunity.

“The FAM staff I have interacted with are tribal citizens with a focus on properly representing the cultures and histories of all Oklahoma tribes. It touches my heart to know that the people doing the daily work at FAM have a deep, cultural connection to their work,” Lowden said.

The museum’s designers and architects worked meaning and Native significance into every portion of the building and property. Tesia Zientek, CPN tribal member and CPN Department of Education Director, recognized those connections during a recent tour. The commitment to detail inspires her volunteerism.

“Decades of thought, advocacy and artistry have made the museum what it is today, and it made me emotional to see it come together after so much combined effort,” she said. “The way that the facility incorporates the environment and tribal details from the floor to the ceiling is absolutely breathtaking.”

The structure serves as an astronomical clock, according to Underwood. The sun rises and sets on different sections of the museum to commemorate the special times of the equinox and solstice, as well as observing the cardinal directions.

“Everything about how FAM is positioned is in relation to that,” she said. “So that’s kind of an exciting thing for people to understand that so much thought has been given to not just the objects and things that they’ll find in our exhibitions, but also the architecture and the layout of the museum itself.”

The FAM campus includes a 90-foot mound that connects visitors to an ancient history of Mound Builders while offering a stunning view of downtown Oklahoma City and the Oklahoma River.

“The land itself used to be an oil field. And so we had to reclaim the land and heal the land before we could start the structure of the museum,” Underwood said. “In 2005, there was a ground blessing here with our tribal communities,” with more than 1,000 people in attendance.

The grounds and interior of the building include three Oklahoma Art in Public Places pieces in partnership with the Oklahoma Arts Council, bringing some tribes’ oldest beliefs and traditions into the modern-day.

“There’s just a lot of things that I think people are going to find unexpected and really enjoy seeing over and over again,” Underwood said.

“This museum will be a great opportunity to shine a light on Native American history in this state and to teach people about the history and the culture of all the different tribes,” Barrett said.

The museum offered Lowden and other volunteers a preview of the museum, and she was enthusiastic about the opportunities it provides to bridge that understanding.

“I am excited to see all of the Native people and other Oklahomans begin to explore the museum grounds and facilities,” she said. “I can already feel the energy I know will be present opening weekend.”

Opening weekend kicks off with representatives from all of Oklahoma’s 39 tribes convening, followed by remarks from Chickasaw Nation Governor Bill Anoatubby and a reading from Joy Harjo, the first Native American U.S. poet laureate and Muscogee (Creek) Nation citizen.

The rest of the day’s presenters include Indigenous chefs, artists, musicians and dancers. There will be movie screenings and drum-making demonstrations and even a community mural project for children.]

“Once you get on campus, there’s just so many things to do and engage with First American cultures as well as enjoy the exhibition. So we’re just expecting a … large crowd those days,” Underwood said.

Opening weekend shines a light on the museum’s bigger mission through exhibitions and day-to-day programming.

“Our hope is that people leave the museum as well as our programs with a deeper and revitalized respect for the arts, history and culture of the 39 tribes here in Oklahoma today,” said Adrienne Lalli Hills, associate director for learning and community engagement, and Wyandot Nation member.

The museum welcomes the general public to attend fun family weekends year-round with art activities and interpretive stations included with admission. Walk-in tours and performances account for a tiny portion of its offerings.

“We’ll also be designing programs with our Native visitors in mind,” Lalli Hills said. “So, we’ll have special tours for groups of Native folks that just want to deeply engage with our stories and the objects on view.”

The museum includes two long-term galleries. Okla Homma’s three sections follow a historical timeline of the area once known as Indian Territory, from the land’s original inhabitants to the present day. The interactive exhibits allow visitors to play games, explore and leave with a hands-on experience.

The second gallery, Winiko: Life of an Object, features 140 pieces from the Smithsonian National Museum of the American Indians. In the 1900s, NMAI curated many of the featured items from Oklahoma, and they are returning as part of the exhibit.

“It’s a real homecoming of sorts that those people are able to touch and handle the objects that were their ancestors directly. And so that’s been a really powerful experience to see that connection of today and yesterday together,” Underwood said.

FAM focuses on the present and future, thanks in large to an almost entirely Native staff who dedicate themselves to telling first-person accounts of such a diverse set of cultures.

“The power dynamic is very different when you have Native people telling their own stories,” Lalli Hills said. “So I believe deeply in the mission of this institution and in the exhibition projects.”

Many volunteers are also Native American, and Zientek feels excited about the inclusion and opportunity to serve.

“It’s important to me that Indigenous people are driving FAM’s exhibits and programming, and I’m even more passionate to see Citizen Potawatomi citizens contributing to the effort. Our Tribe wasn’t originally from Oklahoma, but we are here now, and I want our voices to be heard and faces seen,” she said.

While opening weekend seems like the end of a long-awaited goal, the staff perceives it as the opportunity to teach everyone about Indigenous peoples and turn visitors into allies for a greater purpose.

“Long story short, we’re just really glad to be able to open our doors finally and to be able to share with the world the value of First Americans and our contributions to society, not in the past but also today,” Underwood said.