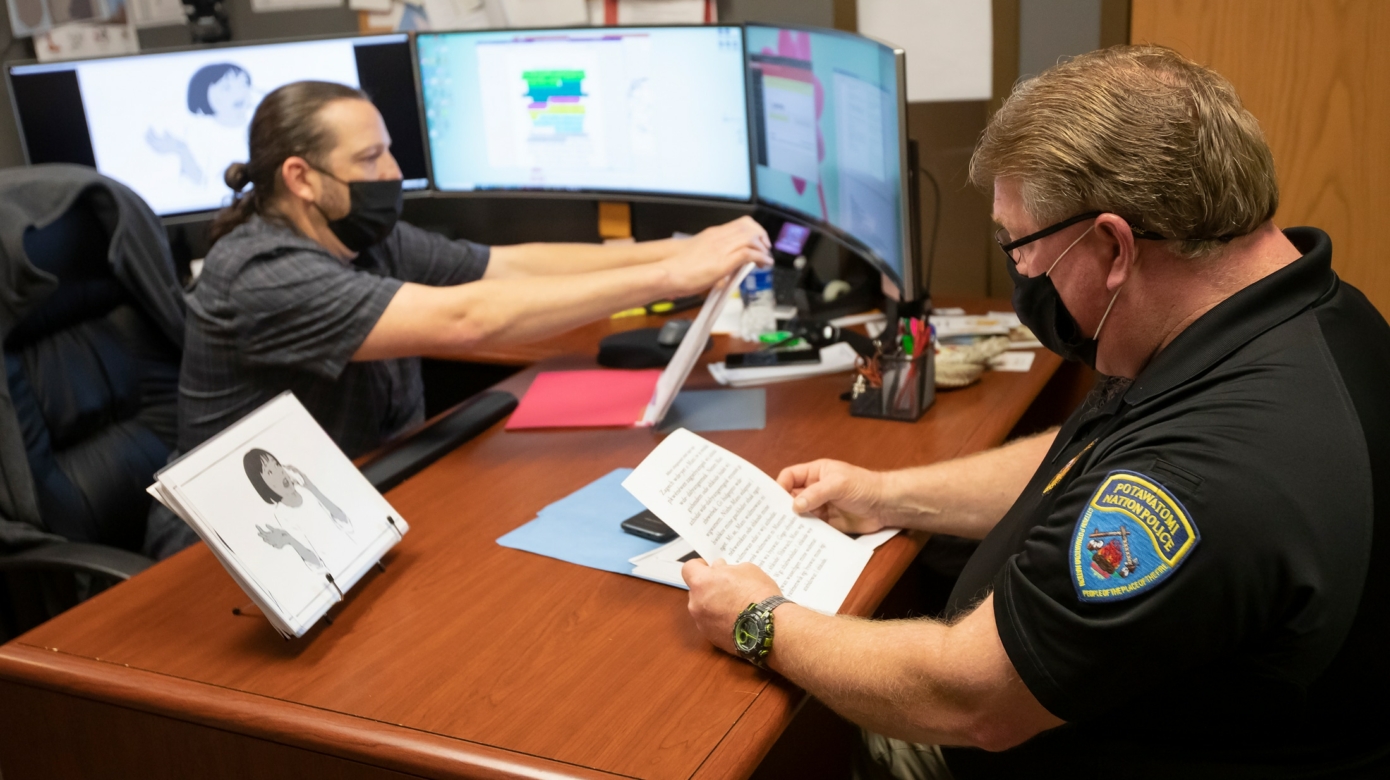 Citizen Potawatomi Nation Police Department Sgt. Chris Berry makes his way to the Cultural Heritage Center Friday afternoons before his shift for a one-on-one Potawatomi language class with instructor Robert Collins. Berry sees it as an opportunity to challenge his mind and understand more about the Nation and people he serves.

“I am the type of person when I get involved with a community, I want to be involved in everything,” Berry said. “I saw things with Potawatomi writing and words on it, and I thought, ‘I need to learn what that is.’”

Before accepting his current position, Berry worked as a security guard at the CPN East Clinic where he learned about an in-person class happening three years ago. Wanting to be polite as a non-Tribal member, he asked CPN language aid Randy Schlachtun about attending and began his Potawatomi language journey.

“I just really enjoyed it, and I just picked it up,” Berry said. “It has really came naturally to me, and I was able to retain it. I’ve been trying ever since to just keep learning.”

The coronavirus pandemic has halted in-person Potawatomi language courses, but Berry did not want to stop his momentum. CPN language aid Robert Collins stepped up to provide weekly one-on-one sessions.

“It gives me a break from police work,” Berry said. “I’m not married and live alone, so I just wanted something productive.”

Collins sees the language lessons with Berry and others across the country as an opportunity to hone his skills while helping others grasp Bodéwadmimwen.

“It’s great to see how Potawatomi and non-Potawatomi take this.”

Sgt. Berry began his police career at the age of 21, serving municipalities across Oklahoma before beginning his tenure at CPN.

“One thing I do when I’m out on patrol is I drive and think about ‘How I should say this word?’” Berry explained. “I’ll try to make sentences on my own, then I come in and ask Robert, ‘Is this right?’”

He upholds respect and admiration for others in everything he does, whether that includes learning a second language or serving as a CPN police officer.

“I don’t want to make anybody upset by my saying something wrong. I want to learn how to say it right, and I wouldn’t want someone thinking I was insulting them,” Berry said.

Listening and writing down new words, phrases and conjugations helps with retention, and using the language with his two Chihuahuas and while on the clock cements the lessons into long-term memory.

“I will say things to the guys at the PD sometimes, and I’ll stop and tell them what I said and translate it,” Berry said. “I think that’s really neat.”

Wanting to improve students’ success, Collins and other CPN language staff began incorporating total physical response — a method of teaching oral proficiency — into their lessons with learners of all ages. He also researches prior CPN Language Department projects to keep classes fresh and new for those he teaches one-on-one.

Collins encourages Berry and others to not rely on traditional Western methods for mastering Potawatomi.

“Don’t just use a dictionary to try and translate. You’re trying to learn versus just acquiring it. You didn’t do that when you were 3 and 4 years old trying to learn English. You just learned English,” he said.

Collins highlighted the Potawatomi word byékkendan (come to know it) as a good foundational rule for becoming proficient in Bodéwadmimwen. He said it stands as an example of the dedication and patience required to be successful.

“Learn something every day. … Our language was given to our people here, on this continent, Turtle Island. That’s what gives (Potawatomi) its spirituality and its strength. … It all starts with one word,” Collins said.

While he does not want to deter others from success with added pressure, he said each Tribal member has an important role in ensuring the Potawatomi language lasts for generations to come.

“When it gets difficult, think about our ancestors and the suffering they went through when they had (the language) ripped from them,” he said.

Numerous options exist to learn Bodéwadmimwen, including one-on-one virtual or in-person lessons with instructors like Collins, as well as online courses, smartphone apps, videos and more. Find information on available resources at potawatomiheritage.com/language and join a virtual group of learners on Facebook at cpn.news/langfb.