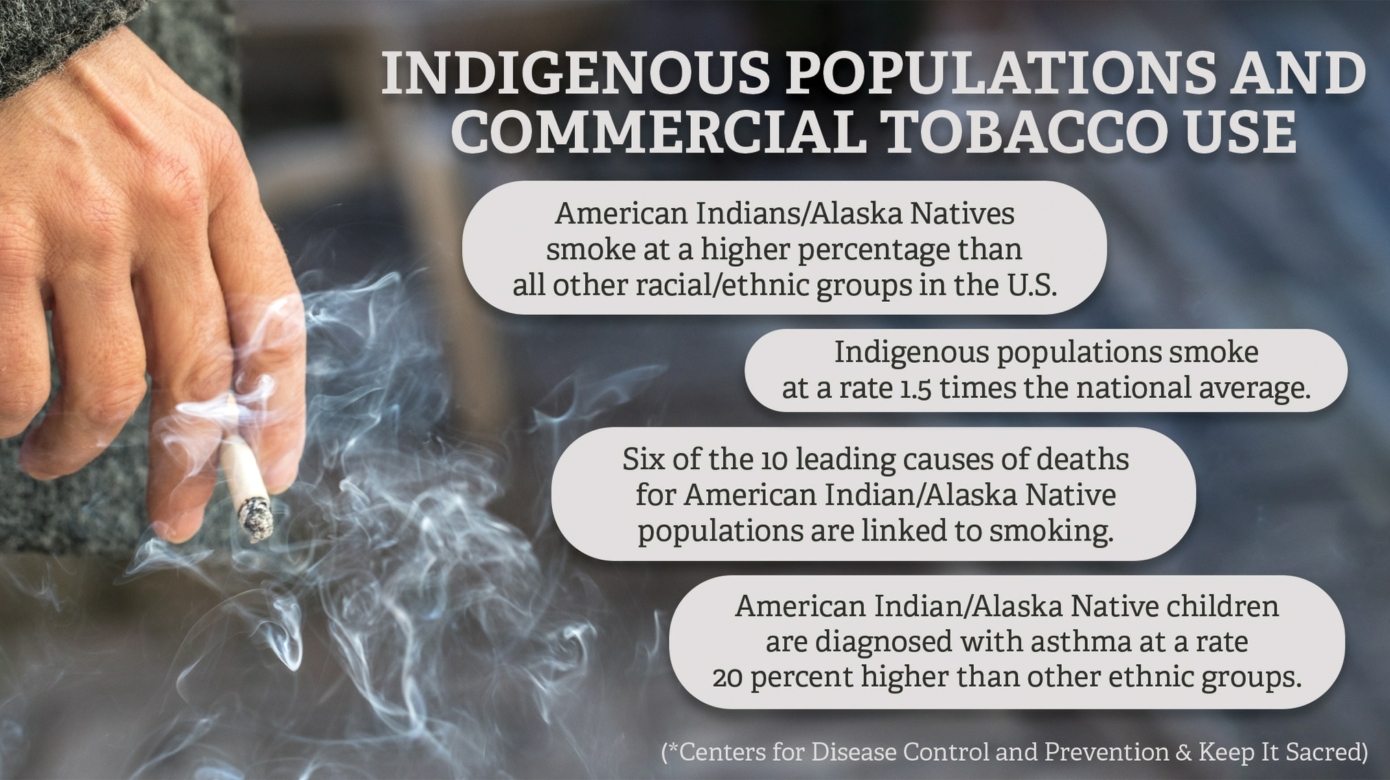 While rates have decreased by approximately two-thirds in the last 50 years, the Centers for Disease Control and Prevention reported in 2019 that 34.2 million Americans smoke cigarettes. Its prevalence among American Indians/Alaska Natives remains high at 1.5 times the national average, or 26 percent of all Native Americans.

“Back in 2001-02, Oklahoma tried to get the tribes more involved, and so they created a coalition, the Native American Tobacco Coalition, and I was one of the ones who was part of that original group representing (Citizen Potawatomi Nation),” said CPN Behavioral Health Therapist Ray Tainpeah.

He began working for the Nation’s behavioral health department in 2000, and after attending training and learning about resources, Tainpeah started leading smoking cessation classes for Tribal members and employees in 2005. The department holds eight-week courses throughout the year for groups of eight to 12. The sessions use the American Lung Association’s Freedom from Smoking curriculum and teach attendees various options for giving up cigarettes forever.

The National Native Network’s Keep It Sacred campaign reported the disproportionate levels of chronic diseases among American Indians and Alaska Natives, including lung cancer and asthma, reflect high tobacco use in the same populations.

CPN Health Services offers Chantix as a method to quit; often something attendees have not tried before.

“That’s one thing that keeps people coming and staying is to get on the medication and that it’ll work — it’ll do what it’s supposed to do to block the brain receptors. With the absence of the nicotine, the brain doesn’t realize that the nicotine is not there,” he said.

However, Tainpeah said the best method is whatever works; he discusses lozenges, patches, gum and other options during the course.

While the physical methods to cessation remain essential, a strong peer network proves its psychological worth throughout the group class. Tainpeah said it typically takes six or seven serious attempts to quit before someone permanently breaks the habit, and encouragement makes all the difference.

“That’s what’s unique about this class is that you get support from the other people. Oftentimes when people try to quit on their own, they’re met with a lot of negativity. ‘You’re not going to quit. You tried to quit before.’ … And unfortunately, even sometimes in family members, there’s not a lot of support,” he said.

Tainpeah understands the struggle to quit; he smoked for 10 years as a youth and young adult.

“It’s helpful to work together, and it eases people’s resistance because sometimes they’re unsure whether they can do this,” he said. “And so when they see that there’s other people here who are going through it, too, or have been through it, it helps them. It helps to calm their nerves about doing a smoking cessation class.”

Since successfully quitting takes many attempts, breaking someone’s self-doubt about their ability to commit to their decision is a significant barrier. Tainpeah believes the community environment allows people to redirect their thinking — the first step in the stages of change.

As a citizen of the Kiowa Tribe, Tainpeah knows the effects of Big Tobacco on Indigenous communities. He shows videos explaining the companies’ marketing efforts to create customers for life beginning at a young age. It often motivates attendees to attempt to stop the cycle.

He also incorporates Native uses of traditional tobacco as a part of prayer. At the end of the course, attendees make tobacco ties using the medicine wheel’s colors — red, yellow, black and white.

“We take the commercial misuse of tobacco out of our lives and put it back in its proper place where different tribes still use tobacco in a ceremonial way, in a controlled way,” Tainpeah said.

“Being in a tribal clinic, we have that opportunity to explore and incorporate those different tribal beliefs and customs and ways that’s going to be helpful for them to connect or reconnect to their heritage or to their identity as tribal people.”

Leading the group smoking cessation classes has become one of his favorite and most satisfying parts of his job.

For more information from the Behavioral Health Department, visit cpn.news/CPNBH or call 405-214-5101. Read more from Keep It Sacred at keepitsacred.itcmi.org.