Protecting the world’s most valuable resource 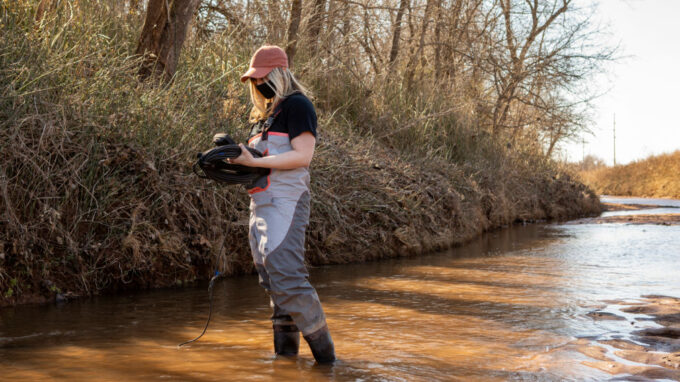 Across the globe, people recognize March 22 as World Water Day. It began in 1993 as a celebration and raises awareness of those living without access to clean, safe water. The Citizen Potawatomi Nation employs efforts within its jurisdiction and incorporates traditional methods to remove contaminates, clean and restore Tribal waterways to benefit the Nation and community at large.

Lexi Freeman, CPN environmental coordinator, oversees much of the Nation’s work to monitor local water systems. As a Tribal member and Rhodd descendant, Freeman sees her work as necessary to upholding CPN traditions and safeguarding them for generations to come.

“I think it’s one of those things that every Native American community can relate to — that water is life,” she said. “Even in Oklahoma, it’s important for the tribes to protect what’s ours and what we have jurisdiction over.”

According to the United Nations, 2.2 billion people have contaminated drinking water, which increases the risk of contracting diseases. The U.N. World Water Development Report released in 2015 said, “Water is at the core of sustainable development. Water resources, and the range of services they provide, underpin poverty reduction, economic growth and environmental sustainability. From food and energy security to human and environmental health, water contributes to improvements in social wellbeing and inclusive growth, affecting the livelihoods of billions.”

As a Great Lakes tribe, the Citizen Potawatomi have always relied on waterways to procure food, travel and more. After removal west to the Great Plains, access to freshwater decreased, but the resource’s importance remains. Because of this, CPN monitors 10 sites across Pottawatomie County using a multiparameter water quality sonde — a small, easy to transport piece of monitoring equipment with multiple sensors — and collects water samples, to test for dissolved oxygen, nutrients, and other water-related factors.

“I sample 19 parameters at each sampling location monthly to establish a baseline. It helps us figure out changes; for example, is our water quality improving or declining? Then we report that to the EPA every year. Based on those results, we decide what we want to do,” Freeman said.

Her research indicates whether the waterways meet designated use, such as agriculture and primary body contact recreation.

“The waterways around the Tribe are typically high in nutrients, which isn’t the best thing but (is) common for rural, agricultural and livestock-heavy operations,” Freeman said.

In addition to the runoff from farming and ranching operations, she has noticed municipal-related pollution as well. An unnamed tributary near CPN headquarters is downstream from a sewage plant, and occasional leaks cause contamination.

“That tributary feeds into Squirrel Creek, which then feeds into the North Canadian, and that’s what runs by the aviary and then down to the river,” she said.

Because of this, the Nation decided to use grant funds to create a wetland enhancement project north of the CPN Eagle Aviary.

“The stream runs through the wetland, which works as a sponge. It works to filter through the increased E. coli, nitrogen and phosphorus and total dissolved solids exceedances (that) we typically see at Squirrel Creek and allows it to settle and filter through the natural vegetation before it joins the North Canadian,” Freeman explained.

Since beginning the wetlands project, CPN Eagle Aviary staff have noticed the return of wildlife, which they deem as a key indicator of success.

“The eagle aviary is very important and sacred to us, so protecting that from flooding and improving the water quality so that ceremonies can happen is critical,” Freeman said.

CPN is currently working toward the final phase, which will help further control flooding, and the goal is to eventually incorporate walking trails to teach the public about native plants, wildlife and the importance of protecting water quality for generations to come.

“I think what we’re doing is really important, and I think it’s nice to see our self-governance working to improve what’s around us,” she said. “Definitely, seeing improvements is really gratifying and shows we’re making progress.”

Freeman said everyone can play a role in protecting our water systems. For those working in agriculture, extension agents can offer resources and best management practices to decrease farm and ranch-related runoff.

“Also, pick up your trash, and make sure you’re not dumping into creeks and rivers,” Freeman said. “Doing things like that make a difference, too. I think it’s just educating yourself and being aware of what your impacts are to the water.”