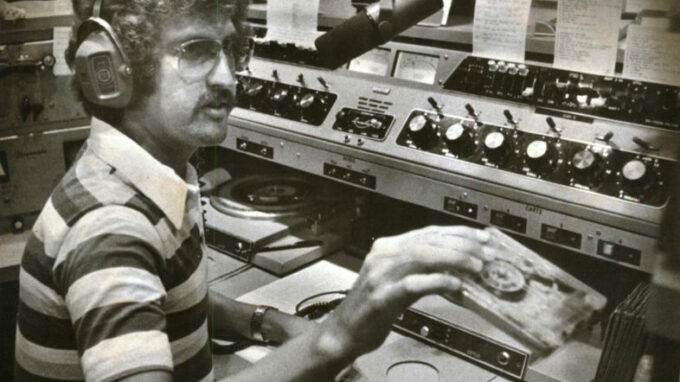 “They maintain that community standard and that sense of public service that I find really important,” said general manager Mike Askins. “That’s one of the things that when (Chairman John “Rocky” Barrett and Vice-Chairman Linda Capps) made me manager, we talked about that. I said, ‘My first service will be to serve the community and the city of license.’ And they said, ‘That’s what we want.’”

Askins is a staple of local radio in Pottawatomie County. He first took to the KGFF airwaves as a 16-year-old in 1976, making him a part of station programming and staff for 45 years. In addition to general manager, Askins serves as program director, chief operator, director of engineering, producer and host of Mike in the Morning, the weekday drive-time show.

Changes in pop culture, multiple owners and the dawn of television resulted in many iterations of the station throughout the last century. Its first studio was at the top of the Hotel Aldridge in Shawnee, Oklahoma. Programming premiered with the KGFF Devotional Hour on Dec. 10, 1930, at 9 a.m. The day also included Shopping Suggestions to highlight local merchants and Luncheon Music live with Chic Haynes and His Hotel Aldridge Orchestra — to name only a few shows.

Much of the music, news, and dramatic and comedic programming were live and local for decades. Radio was the dominant source of information and entertainment in the early and mid-20th century. KGFF records from general manager Maxine Eddy recount plans for covering D-Day during World War II in June 1944.

“To give listeners and readers warning that the news for which we are all waiting has come, KGFF has made arrangements with the O. G. Harp Poultry and Egg Company and the Rock Island Railroad Company for a whistle signal to extend for three minutes. This simultaneous whistle blast will be notice to Shawnee residents that KGFF will return to the air immediately,” Eddy’s station memo stated.

Askins went to the KGFF studio with his father for the first time in the mid-1960s. He was an ordained minister, English teacher and disc jockey at the station.

“To me, it was magic and, you know, electric lights and sparkly everything, and … it was just so cool. And so listening to him on the radio, I just found something fascinating about that,” Askins said.

Inspired by Saturday Night Live-style sketch comedy, he and a friend began performing routines at local open mic nights, where the KGFF program director heard them.

“We were just pretending to be two news anchors, and we were doing corny, silly, strange, dumb jokes about local personalities and places, and … we made up an entire fictitious series of places,” Askins said. As he got older, his part-time comedy routine turned into a full-time disc jockey job in 1979.

“The joke is that I’ve stayed in radio because I can’t get a real job,” he said and laughed. “So that’s what I tell people. But the truth is, I’ve always enjoyed the creativity in radio. There’s a lot of theater of the mind going on there, and I enjoy that level of theater.”

In the early 1990s, Askins began hosting the drive-time program Mike in the Morning, bringing his sense of humor, news and music to Shawnee and the surrounding area.

“I enjoy comedy. I like a good laugh, and I think the world gets too serious sometimes. And people throw on the radio, and all they hear is bad news, and I want to make them giggle,” he said.

Askins enjoys working for a smaller station. He believes KGFF provides resources and information to people and businesses that remain unavailable anywhere else. CPN’s purchase in the late 1990s matched the Tribe’s desire to focus on the surrounding towns.

“Citizen Potawatomi Nation, in addition to being the largest employer in the county, they still maintain that community service, whether it’s giving to schools or program or different organizations, all these different things that they do in the way of giving money to programs. We also are here to give voice again to those programs and as a voice for the Nation and a voice for the other folks in the community,” Askins said.

During Mike the in Morning, he honors a “Working Person of the Day,” someone nominated for a gift card and other small presents from local businesses. It started as “Working Girl of the Day” in the 1970s to pay tribute to secretaries and other women who kept offices and businesses running. Askins expanded the program, and during the pandemic in 2020, the calls increased dramatically to honor frontline workers.

“At one point, I think we had about a three or four-month waiting list … because of the number of people who were just (saying), ‘Hey, don’t forget to salute my friend here, my friend there.’ And we just had a deluge of them,” he said.

KGFF also provides local weather coverage. The station reports on the rural areas in CPN’s jurisdiction, which Oklahoma City metro stations often skip. During spring 2012, a tornado touched down in Tecumseh near many of the Tribe’s businesses. While sirens wailed as the storm approached, Askins remained on the air and kept track of its movement.

“I got a phone call three days later from a lady who said, ‘I didn’t know what was going on, turned my radio on, and I heard you tell me where the tornado was.’ She says, ‘I literally stepped into my cellar the second it hit my house because you said, go to your cellar now.’ She goes, ‘You saved my life, thank you,’” Askins said, tearing up.

She hung up before he got the chance to ask her name.

“That made 40-something years telling bad jokes worth it, right there.”

KGFF has proved itself an asset and an essential part of the larger Pottawatomie County community for nearly 100 years, and shows no signs of slowing.