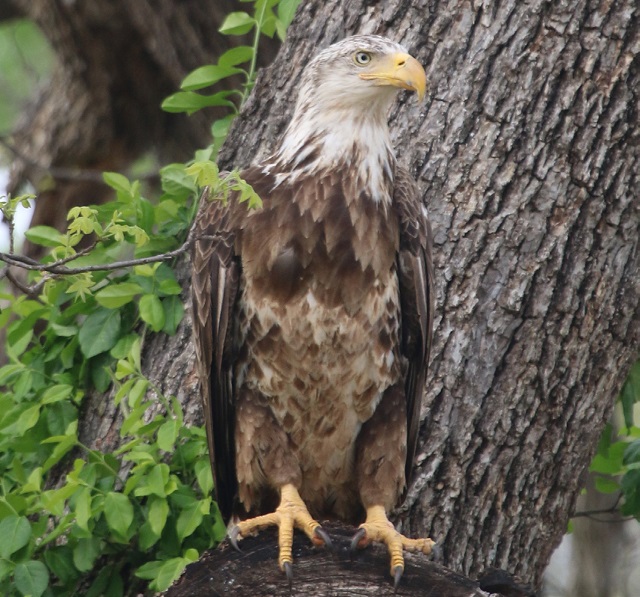 In late March 2017 a new and unexpected visitor arrived at the Citizen Potawatomi Eagle Aviary.

A sub-adult male bald eagle flew in to the aviary grounds, located on private, tribal lands south of the North Canadian River.

“He made himself right at home and we have seen him daily,” said CPN Eagle Aviary Director Jennifer Randell. “We think it may be because he is a juvenile, he is curious about the other eagles here.”

Randell reported that the visiting eagle is often perched high in the big pecan tree in front of the aviary each day at sunrise. The location is interesting given that Wadasé Zhabwé, a bald eagle rehabilitated and released by the Citizen Potawatomi Nation in 2013, uses the very same perch when she visits.

The newcomer has taken many flights around the aviary’s half round enclosure where the CPN Aviary eagles are housed.

“It’s as if he is seeing how big of a response he can get from eagles in the enclosure. Last week, he showed up with a guest that appeared to be year younger female. She stayed just a few days before moving on,” said Randell.

The aviary houses several non-releasable eagles who are cared for by the staff. Many have been injured and left unable to fly or be returned to the wild. For the Citizen Potawatomi, the eagle is a sacred messenger between people on Earth and their Creator. Caring for the injured birds, which are also the national symbol of the United States of America, is a responsibility the tribe has taken on since opening the aviary in 2012.

If you would like to learn more about the CPN Eagle Aviary, visit www.potawatomiheritage.org/#aviary.