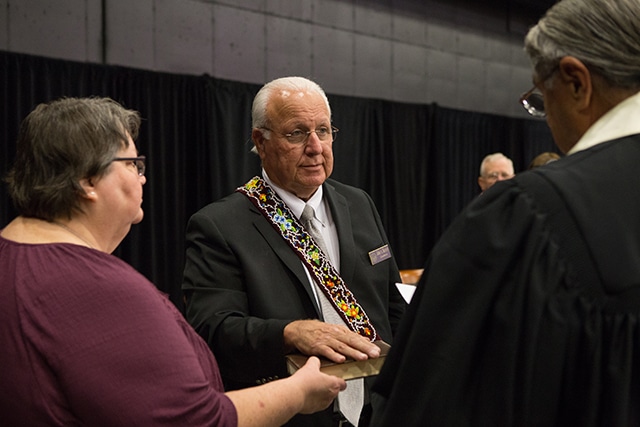 After a blessing and presenting of colors by the CPN Veterans Organization Color Guard, tribal election results were announced by Gary Bourbonnais, chairman of the CPN Election Committee.

For the election of the tribe’s highest office, incumbent John “Rocky” Barrett of Shawnee, Oklahoma defeated challenger Steve Castaneda, also of Shawnee, by a vote count of 1,689 to 306.

“I’m grateful to the Citizen Potawatomi people for allowing me the honor of continuing a leadership role with the tribe,” said Tribal Chairman John Barrett. “I know this couldn’t have happened without the help of many talented and dedicated people and I thank them for their support. I look forward to helping the tribe provide ever-increasing opportunities for our people and partnering with our local communities.”

Barrett ran on a platform of continuing progress for the tribe, which has grown in population and economic standing since he became tribal chairman in 1985. 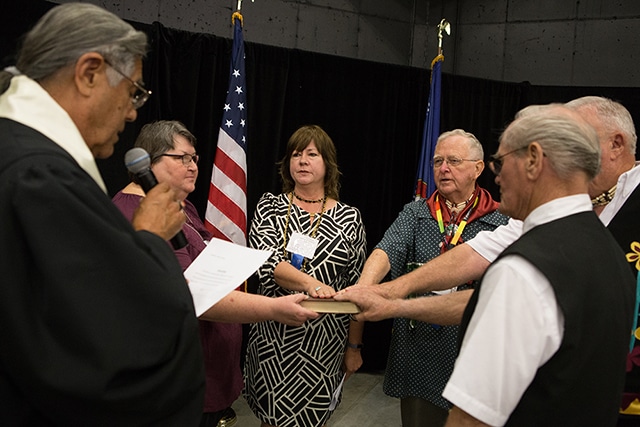 In the race for the Kansas seat of District 4, incumbent Jon Boursaw of Topeka, Kansas defeated Topeka’s Theresa Adame by a vote of 150 to 86. The two have now faced off in three consecutive elections, the first in 2009 when

Adame won, the second in 2013 when Boursaw came out on top.

“I genuinely appreciate the support I received from across the District; I could not have won without it. I am extremely honored and pleased to continue as your legislator for another four years. You have my commitment to do the best I can as your representative.”

Adame thanked her supporters, saying she was sorry they could not come out with a win but that she would remain active in District 4.

“Some may say ‘Look, she lost. Why would you want to put yourself out there like that?’ “I answer, ‘Why wouldn’t you? It gave me a forum to talk about the importance of voting and other issues.’”

Whistler commented on his victory, saying “I am very honored that the District 3 tribal members have decided to have me represent them for the next four years. I will be focused on living up to their expectations and will serve proudly.”

Humphreys, who ran in his first tribal election in 2017 congratulated his opponent on the victory. He said he was humbled by the support he had received.

“Legislator Whistler has and will continue to have my respect, support, and loyalty. Bob Whistler is a good man doing a great job as the legislator of District 3. Bob I pray for your good health and happiness for you and your family.”
In CPN District 1, Roy Slavin was re-elected after no opponents fi led.

The annual tribal budget also passed with 1,863 votes for, 115 against.