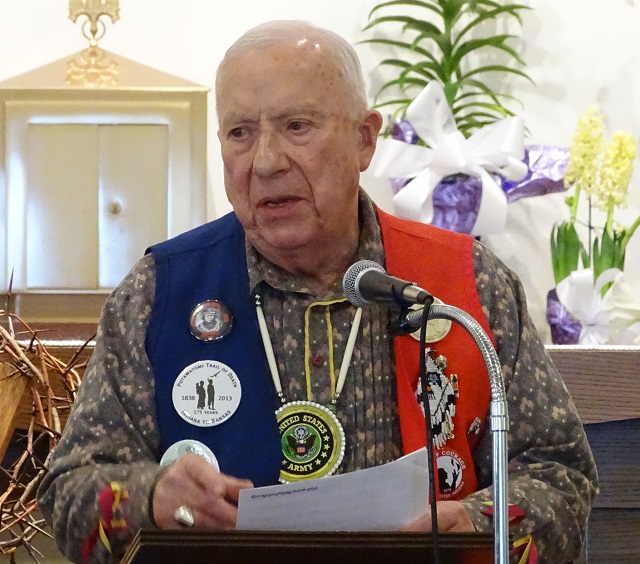 It was a bright sunny day in Rochester, Indiana, when more than 200 people of many faiths came together in a Catholic church to honor Native Americans for the State of Indiana’s Indian Day on April 22.

The first time the Potawatomi marched down Main Street in Rochester was in September 1838, when Indiana government officials followed President Andrew Jackson’s orders to forcibly remove Native Americans from their homeland. That was during the beginning days of what came to be known as the Trail of Death, a 600-plus mile route followed on foot, horseback and wagons by the Potawatomi from Indiana to Kansas.

Along the way, more than 40 Potawatomi died from sickness and exposure, thus the arduous twomonth journey being named the “Trail of Death.” Marchers travelled 10 to 15 miles on most days to reach Sugar Creek, Kansas, close to present- day Osawatomie, Kansas. There was no fresh water and many succumbed to typhoid fever after drinking tainted water.

The Indians were accompanied by a French missionary priest, Father Benjamin Petit, who wrote daily letters of what happened on the trail, including the number of births and baptisms and the number of deaths and burials along the way. When the Potawatomi arrived in Sugar Creek there were no dwellings, crops or livestock to support themselves. They ended up huddled in dugout caves wrapped in buckskin and blankets to keep out the cold winter winds of the Great Plains. Father Petit, himself gravely ill, had to leave his beloved people behind to return to St. Louis. There he died at 28 after being ravaged by the same disease that befell many of the Potawatomi.

On April 22, 2017, Indiana residents gathered in Rochester, Indiana, to let the Potawatomi and other tribes know of their sorrow for what happened to the Native Americans of the state. Traffic on Main Street was blocked by police cruisers as the local Catholic priest, Father Mike McKinney, blessed the road with holy water and reclaimed it for peace.

Robert Pearl*, Kiwezi (Honored Person), a Citizen Potawatomi Nation elder, was called upon to speak for the Potawatomi that day. He told the story of his great-grandmother, Theresa, who was a young girl on the Trail of Death. She survived, eventually moved from Sugar Creek to St. Marys, Kansas, married James Slavin and went on to have a family. Pearl, 91, is a direct descendant of that little girl, Theresa Slavin.

Pearl expressed the importance of the subsequent generations keeping the story alive so all will remember the hardships encountered as a result of the Trail of Death.

“I remember my mother gathering us children around the kitchen table and telling us of the long walk that was taken by her grandmother,” he said.

Pearl, the father of five, grandfather of six and a new great grandfather, said he has tried to educate his family about this sad chapter in American history.

“Please tell your children and grandchildren that it is the concern and the love that is being shown to us today that has helped us survive this terrible crisis of our past. We are glad you are here and we wish to bond together in solidarity,” he told the crowd that filled St. Joseph Catholic Church in Rochester.

The event concluded with a Mennonite prayer and the singing of “Peace is Flowing like a River,” a hymn led by Father McKinney, pastor of St. Joseph.

Shirley Willard, of the Fulton County, Indiana Historical Society, had requested Indiana Governor Eric Holcomb issue an official apology for the forced removals mandated by the state. Kansas apologized to the Native American Indians in 2013 and Congress in 2010.

The governor of Indiana sent a proclamation that was read at the ceremony, noting that April 22 was Indiana Indian Day. The governor’s proclamation was presented to Rocky Barrett on April 29 at a CPN District meeting there by Willard on the campus of Notre Dame University in South Bend, Indiana, which once was Potawatomi land.

In the period of 1820-1851, many Native American Indians from a total of 14 different tribes were forced to leave Indiana and go west of the Mississippi River so that white settlers could purchase their land, Willard wrote in the apology from the citizens of Indiana.

“We acknowledge the loss of homeland, suffering and death which resulted, and the deep depression that still exists. The Indiana government did not foresee the tragic results. Our hearts go out to the descendants and we wish to make a treaty of the heart with them,” Willard said. “I think God wants us to apologize to the Indians.”

*Mr. Pearl is the father of the author.