Making your own regalia 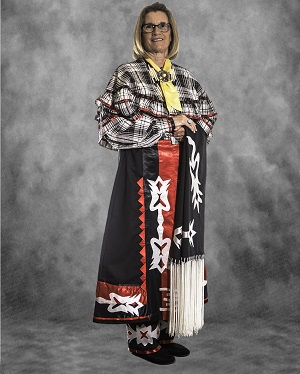 Native Americans have a long history of making their own ceremonial garments – or regalia – and continue that tradition today. In the months prior to June, both men and women meet at the Citizen Potawatomi Nation Cultural Heritage Center to create one-of-a-kind designs for themselves and their families to wear during powwows and the Family Reunion Festival.

CHC employee Leslie Deer leads a class that helps design and create the regalia, but also gives the group creative freedom to choose their own fabrics and designs.

“It’s important to learn how to make your own regalia because you can tell your story better than anyone else and you’re also preserving traditional ways that can be handed down,” she said.

Among the group is Bourbonnais, Tescier and Nadeau family member Czarina Thompson, who said she enjoys the comradery and instruction she gets from other people who attend.

“I love to sew and could sew at home, but I love the inspiration and feedback I get from others who come to our class,” she said. “Leslie is knowledgeable on sewing regalia from different tribes and dance disciplines. Her attitude inspires creativity, individuality and she understands needs based on one’s personal view of who they are based on their cultural beliefs.”

Jayne Fleischfresser – also a member of the Bourbonnais, Tescier and Nadeau families – said she has formed good friendships through the class and that being around everyone lifts her spirits.

“My first project was a tote bag with applique,” she explained. “The big project was my regalia. My Indian name is Bamashi Sego and translates to Soaring Crane. So, of course, I had to add my rendition of a soaring crane and water bird. I chose red and black as the main colors then accented with white.”

Deer encourages all men and women who want to learn how to make their own regalia to join the class, which meets each Tuesday at 5-7 p.m. at the CPN Cultural Heritage Center.