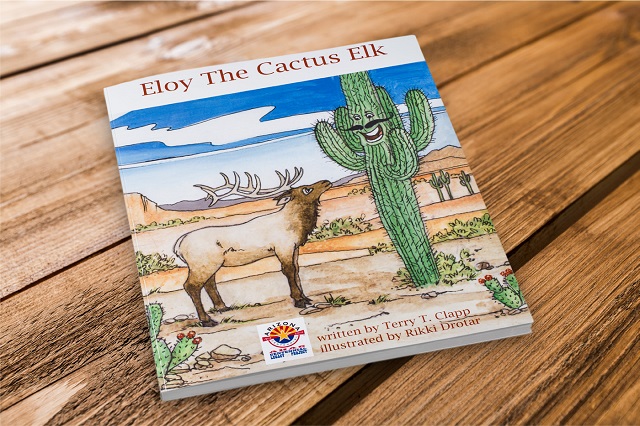 One Citizen Potawatomi member is using his knowledge and talents to invest into the lives of young children. Terry Clapp has written two children’s books that help kids understand nature and conservation.

“The book is designed to get kids into nature,” the author said. “The story is based on a true event of the sighting of a bull elk in the desert in 2005. For Eloy to return home into the mountains he will need the help of many desert friends.”

Both books connect children in Arizona to their surroundings and wildlife by using landmarks and familiar locations to reinforce learning.

“Eloy the Cactus Elk” was granted Arizona Centennial Legacy Project status by a special committee from the Arizona Historical Association Centennial Committee charged to select certain works of art and literature in Arizona along with special events to highlight the centennial,” Clapp explained. “Eloy the Cactus Elk – a children’s picture book – was selected and given this honor by the committee.”

Although he was born and raised in Missouri where he earned his doctorate from University of Missouri-Columbia and worked as a school administrator, Clapp made Arizona his home in 1975 to help establish a medical school for Native Americans. The project lasted three years at Northern Arizona University, but never got off the ground.

After that, he moved to Phoenix where he currently resides. Clapp worked as a research specialist, administrator of an alternative high school, assistant principal for athletics, activities and registration, school physiologist, and even taught at the collegiate level.

Clapp began writing after he retired from teaching and school administration in 1999.

“Hunting, fishing and four grandsons were the spring board for my interest in writing. As you will see by looking at the books, my goal was to encourage children to learn all they can from each reading experience,” he said.

Along with his two published books, Clapp writes outdoor freelance pieces for the Sportsman’s News and several Arizona wildlife magazines about hunting and fishing.

“As a CPN member I have enjoyed a greater awareness of our culture and heritage,” Clapp noted about the tribe. “It is nice to see the progress of the nation and what the leadership has done to help members achieve their educational goals. The effort of those involved in this progress on behalf of all members is noteworthy.”

If you would like to give Clapp’s book to a child in your life, please visit cpn.news/eloy. All of the profits go to support elk welfare by the Arizona Elk Society.