Barrett points to tribe’s success as testament to his leadership 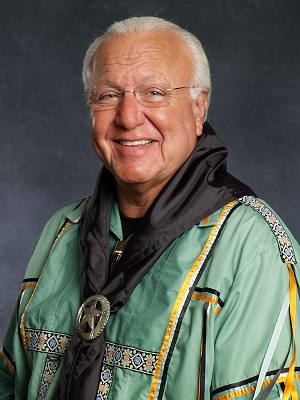 Set to run for the Citizen Potawatomi Nation’s highest executive office is a familiar face to many CPN members around the world, with John “Rocky” Barrett on the ballot for the office of tribal chairman at the June 2017 election.

Born in 1944 in Shawnee, Oklahoma, Barrett’s father, a U.S. Navy Underwater Demolition Team “frogman,” was serving in Iwo Jima at the time of his birth. His Potawatomi heritage stems from his mother’s side of the family, who are Peltiers and Bourassas. Like many of his relatives, Barrett grew up near the tribe’s FireLake complex.

“My great-grandparents had come up from Sacred Heart for a tribal meeting at the agency and my great-grandmother was pregnant with my grandfather, Oliver Peltier. He was born in the wagon yard at the agency,” said Barrett.

The Peltier family allotments are near Sacred Heart mission, in the heart of the former settlements of Georgetown and the town of Sacred Heart in south Pottawatomie County. His great-great-grandfather, Daniel Boursaw, connects him to one of CPN’s other well-known founding families.

Barrett said that growing up, Potawatomi cultural gatherings like powwows were rare. Most, as he recalled, were family-centric, with food and the pitching of horseshoes the main activities. However, there remained family traditions that, when Barrett reflected later, demonstrated ties to Potawatomi cultural practices.

He said his first tribal meeting was in 1947, around the time his grandfather sat on the tribe’s business committee. His first clear recollection of actually attending such a meeting was in 1953 at Shawnee’s Municipal Auditorium. It centered on the tribe’s case with the Indian Claims Commission, established in 1948 to settle lawsuits against the U.S. government for broken tribal treaties

“There was a going joke. We would sit around at night outside of my grandparents’ house – they didn’t have air conditioning – and we would talk about what we would each do with our ‘Indian money,’” said Barrett. “We were convinced we were going to be as rich as the Osages.”

Family gathering conversations between Peltiers and Boursaws often centered on tribal affairs and the Nation’s governance.

He graduated from Shawnee High School with the class of 1962 and went to Princeton University. He took a leave of absence his junior year there, returned home and enrolled at the University of Oklahoma. He married soon after and went to work, then transferred to night school at Oklahoma City University where he graduated with a bachelor’s degree in business.

He grew up working on oil rigs owned by his family’s Barrett Drilling Company, a firm he still runs today outside of his day-to-day work at CPN. During his time at OCU, he took a sales position with United States Plywood Corporation. That job gave way to several others with the company that took him to locales as far afield as Wisconsin, and eventually Memphis, Tennessee. He arrived there just two days before the assassination of Martin Luther King Jr.

“Our warehouse was right within sight of where he got shot,” recalled Barrett. “All that stuff blew up, the riots, the shootings, it was a tragedy. The city was completely shut down.”

After a time in the homebuilding business in northern Mississippi, Barrett returned to Pottawatomie County. He took on his first official position working on behalf of Native Americans soon after as director of the Central Tribes of the Shawnee Area, where he supervised the group’s affairs and oversaw a vocational training program for unemployed Native Americans. His first foray into tribal governance came in 1975 when the chairman of the business committee stepped down. The vice-chairman, Barrett’s uncle, filled the open position, but the remaining members of the committee declined the vice-chairman’s seat. At the encouragement of his family and other Potawatomi, Barrett threw his hat into the ring.

He served two terms in that role before the work on the drilling rigs came calling with the late 1970s oil boom.

“The company drilling superintendent called and said he had a drilling job open on one the rigs. It was $15 an hour – big money then – a day off every two weeks and they would pay my mileage. So I went back,” he said.

In 1982, he was encouraged to become involved in the tribe’s affairs by his grandmother who insisted he apply as tribal administrator given his business background and prior tribal post.

“I said no,” explained Barrett. “There was no answer from her, so I said ‘Grandma there’s 24 cousins, get one of them.’ No response. She was 4’11, but not one to be told ‘no.’ Basically, she intimidated me into going back.”

Barrett set to work returning the tribe’s use of federal programs, which had been suspended due to CPN’s accounting records being in disarray. After serving in that capacity for nearly three years, Barrett ran for tribal chairman, hoping to establish a steady governing system so situations like the one he inherited would not occur again.

His first priority was to put a stop to instances of nepotism and political interference in day-to-day affairs on the tribal government.

“There was an awful lot of ‘you gotta hire my kid, my brother, my cousin,’. There was a lot of that coming from the business committee, as well as constantly telling department heads what to do. It was chaos.”

Barrett’s longtime goal has been to make the tribe as self-sufficient as possible. He noted that his first problem was the Bureau of Indian Affairs and recalled the days when the Shawnee Indian Agency claimed that decisions affecting the lands under its supervision to be agreed upon unanimously by the Iowa, Absentee-Shawnee, Kickapoo, Sac and Fox and Citizen Potawatomi Nation tribes.

“The agency was bound and determined that our territory was to be a multi-tribal reservation, because that way they could play tribes against each other,” he noted.

Barrett said the overhaul of the tribal constitution beginning in his first term was the key to th
e success of the tribe’s growth. The removal of blood quantum determining tribal citizenship, reopening the tribal rolls, creating three separate branches of government and extending the vote to those living outside of Oklahoma came about because of the constitutional reforms.

“The new 1985 Constitution first authorized absentee ballots, created the tribal courts, adopted a set of statutes, and established a separate executive authority after a precedent-setting lawsuit in tribal court.

“Next, we amended the constitution to lower the voting age to 18. It was my privilege to be the author of most of that language. From 1985 to 1989 we did all that along with setting up an internal accounting system that gave us an accurate and auditable set of books…that 48 months is what transformed this tribe.”

It is hard to dispute the scale of the transformation. The photo of the old BIA trailer that once housed the tribal headquarters hangs on his office wall as a reminder of the change in fortunes. When the photo was taken in the early 1970s, CPN had less $1,000 in the bank. In 2015 the tribe had a $513.5 million economic impact in the state, employed 2,400 Oklahomans in more than 50 tribal government programs and commercial enterprises that serve more than 32,000 tribal members.

He believes the biggest challenge facing CPN today is that of succession. If re-elected in June 2017, he said his focus will be on “what comes next.”

“The thing I’ll work the hardest on is establishing a pool of qualified people and a structure that will allow the services and operations of the government to continue uninterrupted in the delivery of services, tribal employment and growing income,” he said. “The structure needs to be there for the next person that is in this office to give them latitude in how they want the government to operate.”

Barrett said he is also proud of CPN’s gender balance among top-level department heads, something he focused on during his tenure. He also said he believed hiring the best candidate for any tribal job has paid off regardless of ethnicity, which in turn has resulted in the best people providing services and income for the tribe.

“I toured the country for five years and specifically asked the people at regional meetings to empower us to hire the most qualified people possible for the tribe and to reject the temptation to distribute small ‘par capita’ checks that eliminate future investment capital. I told them ‘I want to first be able to return your investment, and then use that return to deliver tribal services like scholarships and free prescriptions and housing assistance..”

“I’ve been talking about that issue every year since 1985. I think the people have empowered us to operate in that manner.”

His goal as tribal chairman has been to halt the flight of Potawatomi away from Oklahoma and their tribal home there, something he will continue if re-elected.

“It is all about creating opportunities for Potawatomi to improve their lot in life. Our tribe is the product of three generations of people in a row who lost everything they had except what they could carry on their backs. It is the tribe’s job to help our people catch up with the rest of America.”

As he looked back on his tenure, his focus on providing services and jobs that give tribal members the option to live near to and work for the tribe has come a long way since he first began.

“The underlying goal of tribal government has to be about providing ever-growing opportunity, that’s been the objective since the first day I walked in the door as tribal administrator in 1982,” said Barrett.