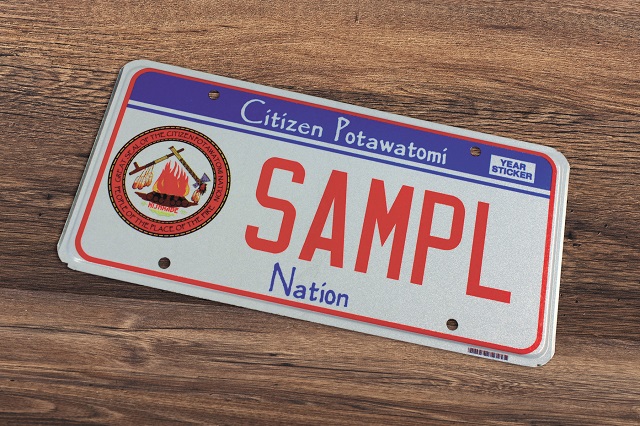 Citizen Potawatomi from across the United States often inquire as to why they can’t show their Potawatomi pride with a tribal tag if they don’t live in Oklahoma.

According to the Oklahoma Vehicle License And Registration Act, “[Indian Tribal License Plates] shall be designed for any vehicle of a native American Indian Tribal Association … and used by the tribal association exclusively for the furtherance of its tribal functions.”

Essentially, the state of Oklahoma is required to recognize CPN tags within the state. But for those tribal members traveling and living outside of Oklahoma, there are some complications.

In the 1998 case, State v. Wakole, an Oklahoman, Priscila Wakole, was pulled over in the state of Kansas for driving her brother-in-law’s car baring a Sac and Fox Nation license plate.

The Kansas Supreme Court ruled in the Wakole case that excluding Indian nations would constitute denial of equal protection based on race or nationality.

The court ruled in Wakole’s favor and reversed her conviction. Thanks to the State v. Wakole case, Kansas was required to include Indian nations in the definition of “state.” This “reciprocity” statute agrees to recognize a driver’s license and tag issued by any other state.

While the courts have made that decision, there are occasions where law enforcement agencies do not recognize or even know of the tribal nations that have license plates. The State of Florida does not recognize tribal tags, creating a long process for a tribal member that sells a vehicle and is told to provide their previous Oklahoma title, which are located with the CPN Tag Agency files.

“I have experienced problems with being pulled over outside of the state,” CPN Vice-Chairman Linda Capps said.

Capps admitted she was speeding in Nebraska when a police officer pulled her over, didn’t recognize her registration and said that he had no record of her vehicle.

“I sensed I was going to have trouble,” Capps said.

The officer spent more than an hour attempting to verify her information.

“I thought I was going to be pulled in.”

Thankfully, Capps had a surplus of identification and was eventually on her way back home to Oklahoma. As one of the members of the business committee when CPN first began issuing license tags, Capps knew of the risks. She had pushed hard in the years before they became available to ensure that they were registered properly and could be found by the Oklahoma Department of Public Safety.

“The tribal tags have done a lot of good things for our schools but there are some pitfalls. We have had some people in other states that have been detained by police because of their vehicle until they could verify with the State of Oklahoma,” Capps said. Because CPN is based here, no state except Oklahoma has a duty to recognize CPN tags.

“We should have less problems now that we have the new database… [but] there still could be problems, our people have to realize that,” Capps said.

While this issue exists, the tribal tags also provide positives for tribal members. For many CPN members, the tags are a source showing their pride as members of the Nation. The CPN Tag Agency also donates a portion of fees for each tag purchase or renewal to the purchaser’s school of choice. Since 2005, $1.7 million has been raised for Oklahoma school funding from their fees.