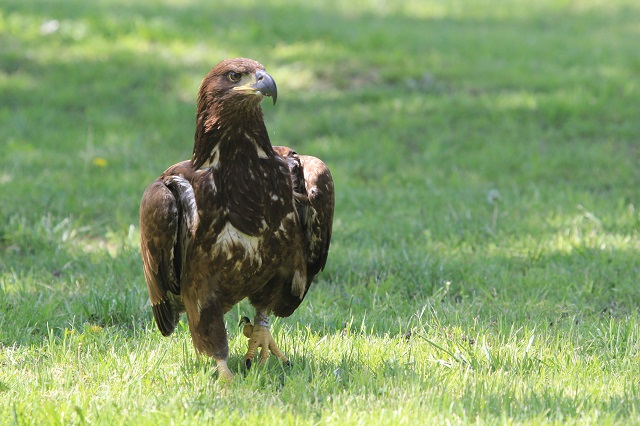 Wadasé Zhabwé, or as she was known then, Penojés, was one of the first eight eagles to call the CPN Eagle Aviary home. Before being mature enough to fledge on her own, she’d fallen out of her nest in Florida in 2012 and was rescued by a good samaritan and taken to the Audubon Center for Birds of Prey in Maitland for treatment. The fall from the nest fractured her left wrist or wingtip, and there was evidence something may have attacked her on the ground as well causing further tissue damage to the already injured wing. According to the paperwork the CPN Eagle Aviary received when she arrived, she would never fly well enough to be considered for release.

“Originally we intended for her to be one of our education birds, to train on the glove,” recalled CPN Eagle Aviary Director Jennifer Randell.

Yet as the birds went through their vaccination regimen, Randell and Assistant Director Bree Dunham noted some changes.

“We noticed her feathers started coming back in. That was a good sign.” said Randell.

As time passed Penojés began to fly inside the aviary enclosure, performing figure eight maneuvers above the other eagles. Following an x-ray, it became clear that the wing injuries had healed much better than expected and that Penojés had a chance at becoming fully flighted.

Randell and Dunham reached out to the U.S. Fish and Wildlife Service and asked permission to release her, but there was a hitch in the plan. Due to her non-releasable status USFWS was not initially supportive of the release, however, after much discussion and seeing documentation of her current status, they agreed to the proposal.

“We believe these Eagles are our messengers and carry our prayers to the Creator,” said Randell. “If for any reason we could get them back out into the wild, that’s ultimately what we want to do.”

Following consultations with USFWS, Randell and Dunham worked to prepare Penojés for release. She was long-lined and conditioned to reach her ideal flight weight and strength. She learned to catch live prey and further demonstrated her ability to survive in the wild on her own.

During this time, the aviary staff members also proposed that Penojés be released at the aviary and fitted with a tracking telemetry to allow them to monitor her progress and study her movements once in the wild.

“Stepping” into the world

Penojés means ‘child’ in Potawatomi, but for a bird taking her first steps into the world on her own, that name just wasn’t going to cut it.

“We had to rename her to send her back out into that big world,” said Randell with pride. “It’s rough out there; we wanted her to have a stronger name, a name that told the story of her journey.”

“It means ‘brave breakthrough.’ It’s hard to put into words, but it means you’ve been through struggles and really hard times, but you’ve come out strong on the other side. It was a perfect name for her,” said Randell.

The day of release, as Randell and Dunham recalled, was one of pent up emotion. Chairman Barrett held a naming ceremony that morning, the first for any eagle at the CPN Aviary.

Following the fitting of the telemetry tracking backpack with assistance of fellow eagle experts from Sia: The Comanche Nation Ornithological Initiative and Raptor View Research Institute, a hooded Wadasé was placed on a platform standing in the meadow behind the aviary. In anticlimactic fashion, once the hood was removed, Wadasé remained on the platform specially built by the CPN Maintenance Department.

“Nothing happened for a few minutes, which seemed like an eternity,” recalled Randell.

After several minutes of surveying her surroundings, Wadasé took flight across the meadow, eventually landing on a branch along its tree line where she roosted for the evening.

Twenty-three days passed before she made her way back to the aviary. She was spotted under the big pecan tree out front, healthy but hungry; she eagerly made her way to the platform once aviary staff provided a meal.

“Initially when we released her she would come back every other day for food, but soon it was once a week, then once a month, then we didn’t see her for six months.” 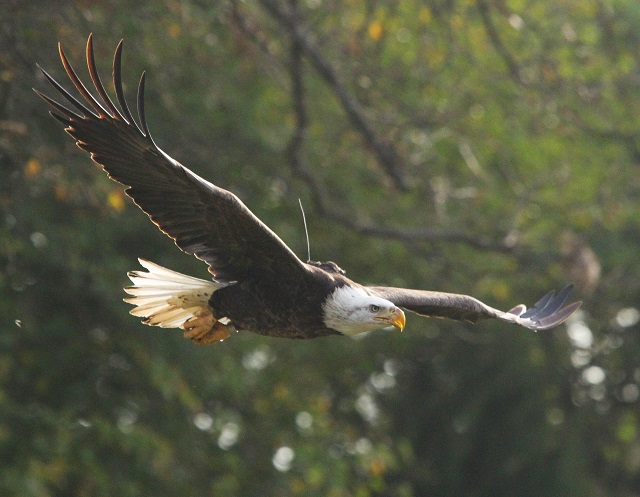 With Wadasé there have been many firsts, including her status as the first bald eagle to be banded and released from a Native American aviary with GPS tracking telemetry. Robert Domenech of Raptor View Research Institute, who fitted Wadasé with the GPS backpack, admitted that day that while he had experience in placing the packs on many birds, a bald eagle was not one of them. Wadasé was the first. Given their tendency to be in and around water, he told Randell he didn’t expect the backpack to remain on her for more than one year before the cotton stitching would break down and the unit would naturally fall off.

Four years later, the pack – roughly the size of a Match Box car, weighing just 48 grams – has remained on the young adult Wadasé. The data gained from the telemetry has been a wealth of knowledge about the patterns and habits of young bald eagles. Many eagles travel hundreds if not thousands of miles during migration.

“We’re fortunate that Wadasé has generally stayed in a 70-mile radius of the aviary,” said Randell with a laugh.

Now in her fourth year of life in the wild, Wadasé Zhabwé is thriving. She no longer depends on the aviary for support but she still visits from time to time. There are many, both in and outside the Nation, who have become avid followers of her progress. Every third day, Randell and Dunham log on to review the telemetry data with as much anticipation as they felt on April 16, 2013.

The aviary staff is quick to point out without people coming together this release would simply not have been possible. From the good Samaritan who found her in the wild, the dedicated staff at the Audubon Center for Birds of Prey, Bill Voelker and Troy of Sia who assisted with her conditioning and release, Rob Domenech from the Raptor View Research Center who came all the way from Montana to band and fit her with telemetry, CPN for the support of this program, USFWS for their efforts and all those nearby who have kept an
eye out for her and follows her journey.

“We just want to thank everyone who made this release not just a possibility but a success,” said Dunham.

If you would like to follow news of Wadasé or learn more about the CPN Eagle Aviary, visit www.potawatomiheritage.org/#aviary.