Tribe begins rehabilitation on one of Pottawatomie County’s oldest bridges 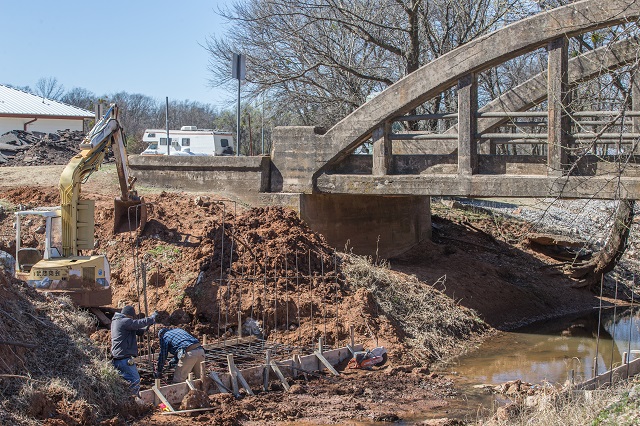 To visitors of the Citizen Potawatomi Nation Powwow Grounds, the sight of construction cones near a closed off concrete bridge spanning Squirrel Creek is a familiar one. Since 2013 it has been closed to traffic, while the tribe assessed how best to repair and preserve the 67 foot span. Over the next year, the structure will go through various stages of repair as the CPN Roads Department rehabilitates what is believed to be Pottawatomie County’s oldest standing bridge.

Constructed in 1917, the single span concrete rainbow arch bridge carries Rangeline Road across Squirrel Creek. It is the only rainbow arch bridge remaining in the state and is on the National Register of Historic Places. Originally running along what was then-known as the Williams Highway linking the towns of Shawnee and Tecumseh, the road and bridge were constructed using labor from prisoners housed at the Oklahoma State Penitentiary located in McAlester, Oklahoma.

According to documents from the time, members of the Citizen Potawatomi Nation living in the area assisted the convicts in their construction of the bridge.

As road and travel infrastructure developed in the county, the main artery between the two largest towns in Pottawatomie County began to be Beard Street, later named S. Gordon Cooper Drive. Despite this, solid engineering and construction stood the test of time as the bridge remained drivable almost a century later. Finally, time and erosion took its toll and in 2013, the structure was closed to traffic. Two years later, through an agreement with the Pottawatomie County government, the Citizen Potawatomi Nation assumed ownership and maintenance responsibilities.

Since taking ownership of the structure, the tribe is able to apply for federal funds to assist in repairing the piece of American history. The Federal Highway Administration will provide more than $300,000 to the project.

The rehabilitation process will be an extensive one. First, an environmental assessment will take place to ensure that the planned construction work will not negatively impact the surrounding environment and Squirrel Creek. Repairs and resurfacing on the bridge’s concrete will be undertaken including placing a three inch concrete cap after removal of the 3-inch asphalt cap. This will be followed by repair of exposed rebar and small cracks in the structure.

The moorings in the banks of Squirrel Creek will also be repaired. Currently, runoff from drain pipes near its structure eroded the bridge’s headwalls. To mitigate this, new concrete headwalls will be constructed around the pipes.

Construction is due to be finished by the end of May 2017, hopefully opening the bridge to foot traffic for visitors to the tribe’s FireLake Complex for another 100 years.