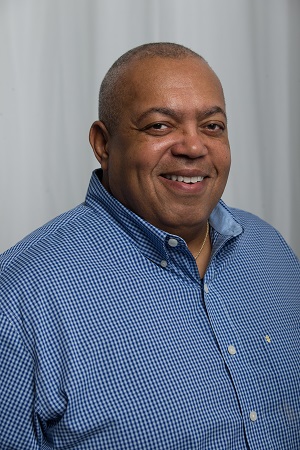 Most of Citizen Potawatomi Nation’s 2,400 employees have dealt with the human resources department in one way or another. Whether through new hire orientation, seeking assistance about employment benefits or even to ask for counsel on workplace issues, tribal employees have a department that looks out for employees and their employer while adhering to tribal, federal and state employment statutes. Leading this department for more than a decade is CPN Human Resources Director Richard Brown.

Originally from Okmulgee, Oklahoma, Brown was a standout high school football player before going on to play at East Central University in Ada, Oklahoma.

Brown intended to keep athletics at the center of his professional career, graduating with a degree in education from East Central in 1982 before returning to Okmulgee. There he signed a contract to take a position teaching and coaching at his alma mater before another opportunity arose.

“Coming out of college, the state offered me a job paying more money (than teaching). I was getting married at the time and decided to take them up on that,” recalled Brown.

He took the position with the Oklahoma Employment Security Commission after a chance meeting with the manager of its Okmulgee office. Brown had stopped by the office to speak to a friend employed there in the summer months before his teaching position began, and the manager recognized him from his time at ECU. He had officiated Brown’s college football games, and after a discussion of his current plans, offered him a short term position to get him through the summer before school began.

Brown never made it to the classroom. Though he didn’t go into coaching like initially planned, Brown did manage to stay connected to football. He has been a Big 12 football official for 23 years, and was even an official for the one season of the XFL.

Two years after starting with the Oklahoma Employment Security Commission, Brown was in a management position. Within a few years more, he had managed several offices across the region, from Okmulgee to Poteau to Norman before becoming chief of employment services at the state capitol complex.

The Oklahoma Employment Security Commission was a creation of Great Depression-era Oklahoma, and according to Brown is the United States’ largest labor pool of workers. Brown’s initial years at the OESC were a baptism by fire for someone in his line of work, as the state suffered from high unemployment as the 1980s energy industry collapsed. Oklahomans of all skill and education levels found themselves out of work or underemployed. Brown recalled coming in to the office during those years and at 8 a.m. there would already be a line of people around the block hoping to find a job.

“White collar, entry level employees, whatever. Those people come in because they were out of work or underemployed, wanting better jobs or better opportunities for their families,” said Brown. “We acted as that middle man that tried to match employers and employees.”

The OESC also oversaw the state’s unemployment insurance system, which Brown emphasized was often used, despite misconceptions about abuse, by people out of work through no fault of their own. He is also an advocate of the system, noting that the OESC offered many Oklahoma businesses human resource management services they were already paying as part of their state taxes. As he explained, the OESC’s labor pool is so large and well catalogued that temporary employment agencies consult its candidates to fill their needs. Brown proudly notes that in his last year as chief employment officer for the state, more than 235,000 workers walked through the 41 satellite offices looking for work or unemployment assistance.

Brown served 22 years with the commission before moving on to take up positions in human resource management duties for the Workforce Investment Act System. After a stint there, he moved on to Citizen Potawatomi Nation, having become familiar with the tribe and its operations during his time with the workforce investment act system.

When he joined CPN in 2005 as director of human resources, it was an interesting time for the tribe and its approximately 500 employees. Tribal gaming had just been approved in November 2004, and like many of its contemporaries, the Nation was in the process of expanding its gaming facilities and building what today is known as the Grand Casino. He’s been with the tribe since, and has helped develop its growing human resources and employment demands amongst its current roster of more than 2,400 employees.

“I work with a diverse staff in the HR department that lives up to our mission of advocating for the Citizen Potawatomi Nation and its employees by maintaining an ethical and positive work environment,” said Brown. “The guiding principles of the HR department are integrity, efficiency and character in all of the its relationships and interactions. I am proud to be associated with this great group of employees.”

In 2017, due in part to his longtime experience in the workforce development system and his leadership at CPN, Brown was nominated as board chair for the Workforce Oklahoma region in central Oklahoma. As chair, he oversees the board that is responsible for Workforce Oklahoma’s Area covering Pottawatomie, Lincoln, Seminole, Okfuskee, Hughes, Oklahoma, Canadian, Cleveland and Logan counties.

“I worked closely with Richard when he was the executive director for the East Central Workforce Investment Board and I was on the executive committee,” said Mills. “I was pleased that someone with his experience and passion for workforce development was willing to step up into a volunteer leadership position. I am excited to have the opportunity to work with him again in providing wealth creation opportunities for our citizens.”

The board works with elected officials in those counties to determine the best use of funds for those out of work or seeking better employment opportunities, including training for skills needed at a new job. The aforementioned counties have vastly diverse levels of infrastructure and employment sectors. They include the state’s largest metropolitan area as well as extremely rural communities, making Brown’s position as chair an extremely challenging one. He noted that one motivation for taking it was to ensure tribal employers, of which there are many in th
e rural communities in board’s jurisdiction, had a voice about their own employment needs.

“Some of your largest employers in these rural areas are tribes…people hear the word ‘gaming’ and they think slot machines, blackjack dealers. But they don’t think about the cooks we hire, about the construction and road maintenance people we hire. I want to make sure the tribes aren’t forgotten.”

After a career in helping people find, train and stay employed, one could forgive Brown if he were cynical or disillusioned with the role of governmental agencies responsible for unemployment issues. Yet his own experiences have cemented his belief that though the system is certainly not perfect, it can produce positive results.

“I’m a product of the system,” said Brown proudly.

As a young man he came through the very same system, received the training and learned the value of work on what the former college lineman described as “back breaking jobs.”

“It taught me that’s not what I wanted to do when I became an adult,” he said. “But it put me in a situation, knowing all that, that when I got my education I would probably be able to help somebody else out who was just like me. I’m proud to have been a product of it.”