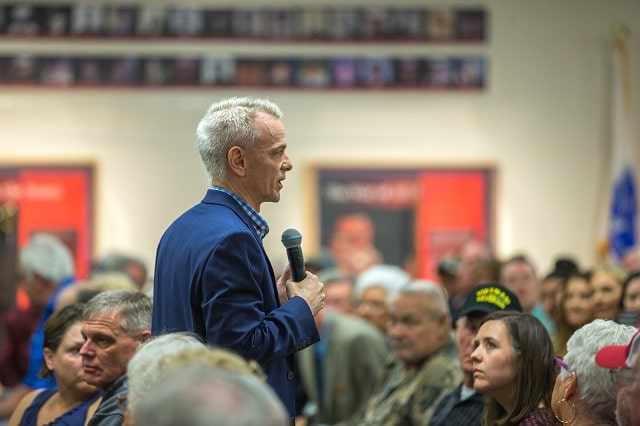 Citizen Potawatomi Nation’s tribal complex falls inside Congressman Steve Russell’s district. The Oklahoma Fifth District representative needed a large venue for his recent town hall, as large numbers were expected to hear from the congressman and give their views on the issues emanating from the nation’s capital.

More than 300 attendees filed into the Citizen Potawatomi Nation Cultural Heritage Center for the event, which though animated and lively at times, remained mostly civil throughout. Briefing the crowd before taking questions, Russell acknowledged though there were some there who disagreed with him, he hoped they could all find a middle ground to help the country succeed.

After several high profile instances of Republican congressional representatives from around the country avoiding possibly hostile town halls due to the ongoing effort to repeal the Affordable Care Act and concerns about President Donald Trump, many of those who asked questions first thanked the former Army officer for hosting the event.

For those concerned about the more popular provisions of the ACA, including the ban on insurance companies refusing to pay for treatment for pre-existing conditions, allowing dependents to stay on their parents’ insurance until 26 and prohibition on insurance companies setting limits due to catastrophic illness and injury coverage – Russell noted that most Americans, including President Trump, were supportive of keeping the first, even after the law’s repeal.

He emphasized that while he didn’t know enough about the details on catastrophic coverage post-ACA repeal, he did say that those under 27 who wanted to stay on their parents’ insurance should be able to do so if they were in school or learning a trade.

Despite numerous outbursts of many in the room to Russell’s responses, he stayed and spoke with several constituents after the meeting.