Tribal employees give back during the holiday season

The holiday season is a time of giving and receiving. Many Citizen Potawatomi Nation enterprises and employees gave to local community members and organizations, serving them in their time of need during Thanksgiving and Christmas 2016.

In November, CPN employees raised more than $1,300 during the annual silent auction to assist a tribal family that accrued extensive medical expenses in 2016. Employees were asked to donate handmade or purchased items and bid on their favorites. More than 50 gifts ranging from Christmas décor to children’s toys were auctioned off.

Additionally, the CPN Employment and Training Department asked employees for food donations to fill more than 300 baskets for clients in need. CPN employees donated 2,768 pounds of food for dinner boxes on Thanksgiving and more than 2,200 pounds for Christmas.

“We would like to thank everyone who participated in the food drive this year,” Employment and Training Social Services and Intensive Employment Case Manager Gina Bundy said. “We had an amazing show of support and received more donations than we have ever seen. I really want to recognize the departments that put out the effort as we would not be able to do it without you.”

More than 1,000 people were served during this event. Shawnee Rescue Mission’s goal is to help the homeless all year round, but the busiest months are November and December before major holidays. With no salaried employees or government funding, Shawnee Rescue Mission welcomes food drives, winter clothes, hygiene products and volunteers each Friday.

“If it wasn’t for this, my family wouldn’t have a Thanksgiving. We will be feeding my parents, three boys, brother, nephew, daughter and son-in-law,” Samantha Samples said with her son Trevor, age four, sitting beside her. “I know a lot of people who would have nothing during the holidays and this place helps them a lot.” 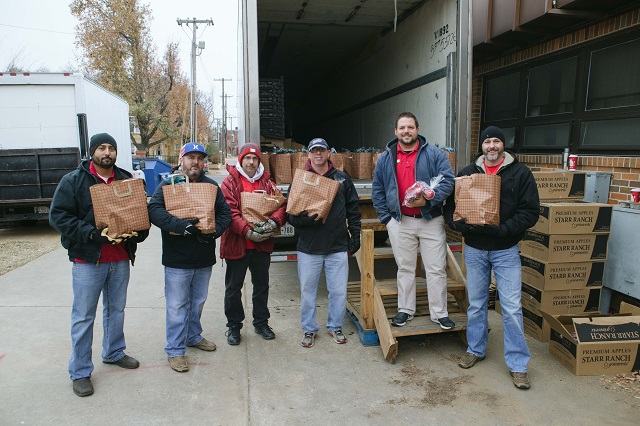 Firelake Discount Foods helped make it a “Christmas to Remember” for families in the community by providing $5,000 toward food and gifts to families who have recently experienced hardship.

Additionally, FireLake Discount Foods donated a basket of food for each of the 350 families at the Salvation Army Angel Tree Christmas event. Each family received bread, eggs, ham, milk and fruit while they picked up their family’s gifts and a box of canned food.

Employees from the Grand Casino Hotel Resort gave back during their annual Christmas party. More than $2,500 and 500 toys were donated to local organizations like the Salvation Army’s Angel Tree Program, Boys and Girls Club, Muscular Dystrophy Association and CPN Child Development Center. For each toy or ten dollar bill donated, the employee’s name is put into a drawing for prizes, like flat screen televisions and gift cards.

“Our employees love it,” Grand Casino Hotel Resort Director Joe Garcia said. “They love to give back to those who are in need during the holidays and get really excited about this event each year. We’ve been doing this annually for more than a decade.”

Tribally-owned radio station KGFF FM/AM collected blankets from listeners and community members to give to elder programs in Pottawatomie County. They also donated $2,000 worth of toys and 400 cans of food to the Salvation Army by hosting the annual cans food festival with the Hornbeck Theatre on December 1.

In December, CPN employees had yet another opportunity to give back to children in the surrounding communities. The annual angel tree was set up with 31 children from the CPN Child Development Center and 22 children foster care through the CPN Indian Child Welfare Department. To relieve some of the financial burden on these parents and foster parents during this gift-giving season, CPN employees chose a tag from the tree, which represented a child in need to purchase clothes and “gifts from Santa” for from the tree. 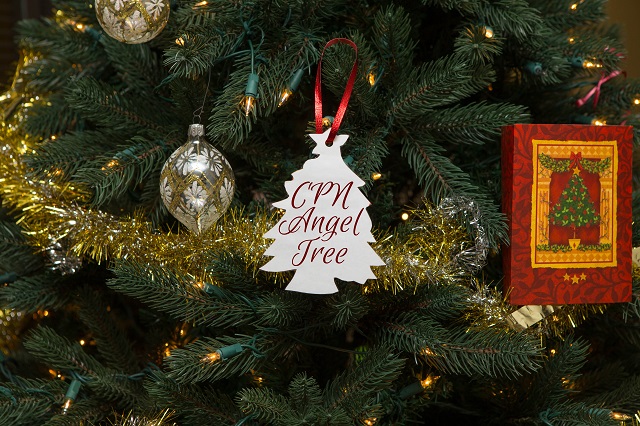 CPN’s commitment to giving back to local communities has been recognized many times, most recently at the annual Beacon Awards hosted by the Journal Record newspaper, where CPN was acknowledged as one of the most charitable organizations in Oklahoma. In 2015 alone, CPN’s total contributions to the community topped $2.8 million. The employees and leadership at CPN drive the tribe to be seen as a community leader in philanthropy, beyond the holiday season.