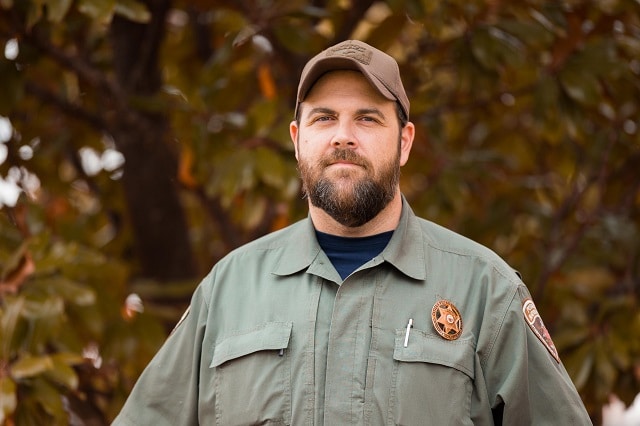 These holdings, strewn across parts of Pottawatomie, Cleveland and Oklahoma counties, all lie in the tribe’s historical jurisdiction established in the 1800s prior to statehood. Yet they aren’t contiguous, leaving them open to trespassers.

“Such scattered parcels become targets for poachers, rustlers, drug dealers, meth labs, pot farms and many other illegal activities,” explained Charles Meloy, director of the CPN Realty Department, who oversees the grant that funds Reed’s work. “In addition, with so many scattered parcels it is difficult for property management personnel to visit the sites on a regular basis to oversee and provide proper oversight and management.”

With respect to these issues, Reed is experienced. Prior to serving as the tribe’s conservation officer, he worked as a patrol officer for the Citizen Potawatomi Nation Tribal Police Department. Originally from Crowder, Oklahoma, he comes from a long line of law enforcement professionals, including his brother and several cousins and had been with the CPNPD since 1999. He is also currently commissioned with the Pottawatomie County Sheriff’s Office Warrant Team, a multiagency unit that serves high-risk felony warrants and works with the U.S. Marshall Service.

In changing from a patrol officer to his current role in July 2015, Reed mentioned that one particular facet of the work stood out to him.

“I just like being outdoors, the wildlife side of it, the game warden responsibilities,” Reed said. “I wanted to head in a new direction and I had worked with the game warden here in Pottawatomie County.”

Reed said his hours can vary depending on what the day calls for, working four or five hours very early in the morning before going home and then later returning in the evening. Much of his work involves patrolling the tribal allotments in southern portions of Pottawatomie County to ensure there are no trespassers or illegal hunting.

Isolation and distance from backup as he patrols largely rural and remote parts of the tribe’s properties are a regular part of the job.

“The most challenging part is being by yourself. I’m 20-25 miles away from the police department, if something happens, I have to be able to deal with it and take care of it until someone can get there to help me out.”

“It’s hit and miss, because there’s roughly 11,000 acres that I look after, and that’s just what they call ‘checkerboard land’. You might have 80 acres over here, and 20 miles away you have 160 acres and it’s real difficult to catch somebody on the property.”

One of his other, and arguably more important responsibilities in terms of its long term impact, is monitoring mineral rights such as oil leases on tribal land. He checks the pump jacks and oil tanks on tribal property, for leaks or  spills, notifying lease owners and energy companies to come clean up if needed.

Realty Director Charles Meloy explained the importance of Reed’s work as a conservation law enforcement officer for the Nation.

“The CLEO is a part of the team of people responsible for overseeing the long term management, enhancement and production from tribal lands. He is frequently the first to see and report on conditions needing attention on the many properties owned by CPN and is the communicator between several of the tribe’s departments, local law enforcement, state wildlife management personnel and the Bureau of Indian Affairs.”