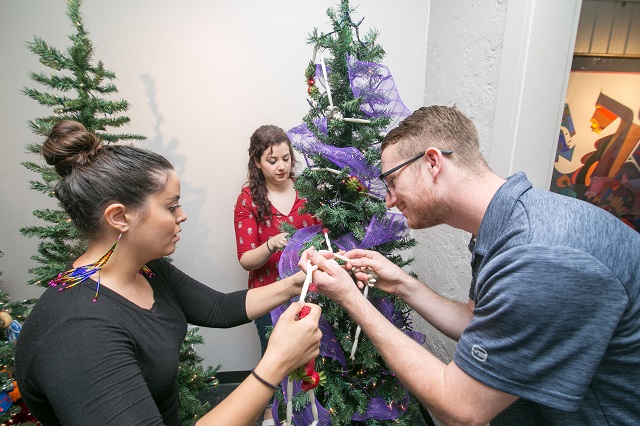 Tribal members and employees decorated a Citizen Potawatomi Christmas tree for the second annual Red Earth Treefest in downtown Oklahoma City. Treefest is an event to celebrate the diverse Native American tribes in Oklahoma during the Christmas season.

“Last year we presented our first Red Earth Treefest to the city and state – and the public loved it,” said Teri Stanek, president of the non-profit Red Earth board of directors. “I know our guests will thoroughly enjoy the Christmas trees featured at Treefest, adorned with beautiful ornaments that represent our tribal cultures so well. This year many of the tribes created additional ornaments that we will offer for sale to the public.”

Staff members from the education and public information departments decorated the tree with culturally-significant ornaments, including medicines, birch bark canoes, moccasins and eagles from the CPN Eagle Aviary. The Potawatomi language and Great Lakes culture were incorporated into the ornaments, as well as traditional regalia on the tree topper.

“Everything on the tree has some kind of cultural relevance to our nation,” CPN Department of Education Director Tesia Zientek said. “One of the main differences between our tree and the others is our use of purple. It is a very important color for our tribe because of the trailing arbutus, or mayflower. This is a great opportunity for the public to see the differences between each of the tribes participating.”

There are more than 15 trees representing different tribal nations, including CPN’s nearby neighbors the Absentee-Shawnee, Sac & Fox and Seminole. Some of the ornaments made by the tribes will be for sale to visitors, but the event is free to the public.

To see Treefest for yourself, visit Red Earth Art Center at 6 Santa Fe Plaza, Oklahoma City on Monday-Friday from 10 a.m. to 5 p.m. until January 13, 2017. There will be special viewings on December 3, 10 and 17 from 10 a.m. to 3 p.m. For more information, please visit www.redearth.org/events/treefest/.