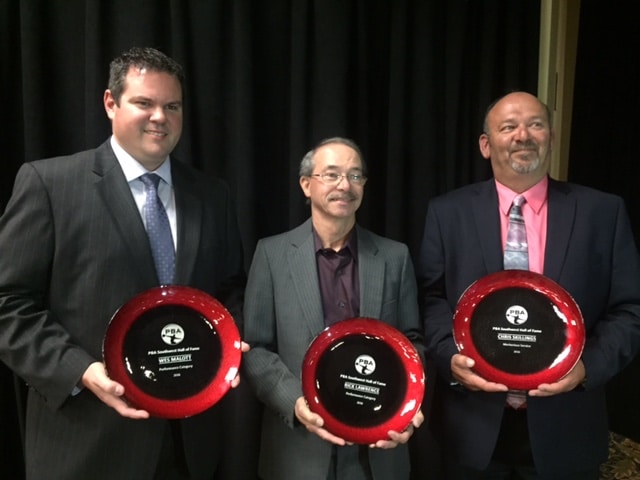 If you’ve attended one of the many professional bowling events taking place in Shawnee, Oklahoma in the past few years, it’s largely because of the work of FireLake Bowling Center Director Chris Skillings. A longtime member of the Professional Bowlers Association, he has worked tirelessly in recent years to bring professional events like the PBA Summer Swing and the PBA FireLake Tournament of Champions to his hometown of Shawnee, Oklahoma. In recognition of these efforts, Skillings was recently inducted into the PBA Southwest Region’s Hall of Fame.

“To be recognized by my peers and friends in the PBA and the southwest region is a huge honor,” said Skillings. “We’ve worked really hard to help develop the sport through partnerships with Citizen Potawatomi Nation, the PBA and our school and amateur bowlers in the Shawnee-Tecumseh area. I’m just happy to see where it is today.”

Skillings graduated from Shawnee High School in 1982, and is a well-known member of the local community. He has been a member of the Professional Bowlers’ Association for almost twenty years, and since 1980 has bowled in the PBA’s Southwest Regional Tour events and other professional competitions. His association with hosting PBA events stretch back to 1984, when as manager of a bowling center in Stillwater, he helped organize and host a PBA competition there. Since then he was helped host events at bowling centers around the area including at Shawnee Lanes, Planet Bowl, the original FireLake Bowl and its successor, FireLake Bowling Center, where he remains director.

In recent years Skillings has promoted large PBA events at the Grand Hotel Casino Resort and FireLake Arena. The 2016 PBA FireLake Tournament of Champions which had nearly one million viewers tune in to the ESPN live broadcast. To date, the FireLake-PBA Tournament of Champions finale was the highest rated PBA telecast of the broadcaster’s 2015-16 season, and was a 17 percent viewer increase over the previous year’s tournament. The 2017 tournament is expected to draw similar numbers and will take place on February 17, while details for a summer tournament continue to develop.

Skillings was a longtime bowler and member of the PBA. A chronic shoulder injury has cut down his time on the lanes in recent years, and he announced his retirement from competition during his induction to the hall of fame.

In addition to his work promoting the sport of bowling, Skillings has had an extensive career in the healthcare sector. In spring 2016, he was named director of CPN Health Services and has served in that capacity, as well as his role as director of FireLake Bowling Center.

“Chris has been an asset to the tribe in many ways in recent years,” said CPN Vice-Chairman Linda Capps. “On behalf of the Citizen Potawatomi Nation want to congratulate him on his induction to the hall of fame, it is a well-deserved honor for a great individual.”