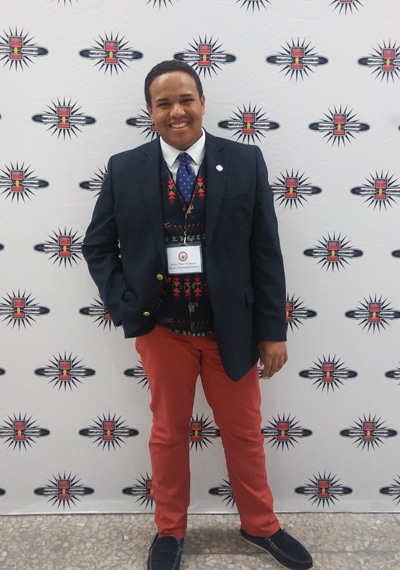 While there, we heard from various tribal leaders, tribal youth, secretaries in President Obama’s cabinet, and from the president himself. It was exciting to hear about different issues that Native Americans are facing. There was a reception at the White House on Sunday afternoon. Chance Rush and Billy Mills were the keynote speakers that night, but my favorite thing was the cupcake with the presidential seal that was given to all in attendance.

Following the reception, I was able to take my grandmother, who was my chaperone, to the George Washington University campus where I showed her my dorm room and my classroom from the INSPIRE Native Youth Program. At the Tribal Nations Conference, there were a few panel discussions with the secretary of the interior, the director of the environmental protection agency, and the secretary of education, just to name a few. At lunch, I was able to locate Mrs. Eva Marie Carney, the CPN District 2 legislator, and had the opportunity to introduce my grandmother to some of the individuals I had met during the summer.

There were more panel discussions between tribal leadership, tribal youth from across the country and the secretaries of agriculture and housing and urban development. To top off the afternoon we were addressed by President Obama! Following the president’s speech, we were released for the evening and Mrs. Carney, my grandmother, and I headed down to the National Museum of the Ameri- Trae Trousdale can Indian, where Mrs. Carney and I were able to show my grandmother the Potawatomi Treaty exhibit. Following our educational excursion we went to dinner at Old Ebbit Grill and headed back to our hotel room.

At the Tribal Youth Gathering the next day, we were addressed by various cabinet secretaries, the special assistant to the president and multiple agency directors. All of their speeches concerned tribal youth, and
we were allowed to ask questions and provide feedback. The highlights of the day were hearing from the chief of the Standing Rock Sioux Tribe and having the opportunity to teach the secretary of the interior and the surgeon general traditional dances.

Attending the conference and gathering at the White House exposed me to situations I do not face on a daily basis, furthered my education of Native American issues, and prepared me to help guide the future of Citizen Potawatomi Nation.