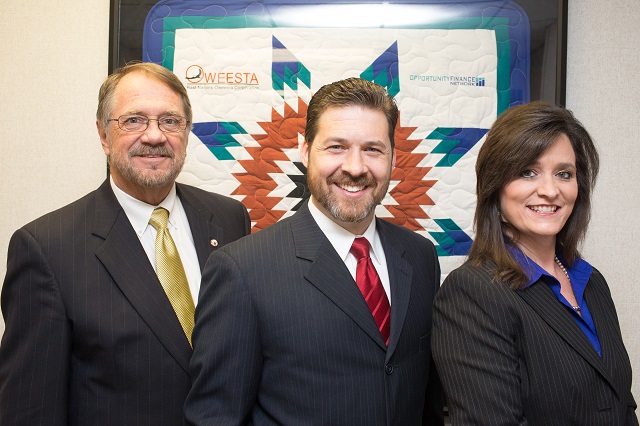 With the American economy creeping along at anemic growth rates, traditional lending institutions continue to hold back on loans for small businesses. Stepping into that gap to provide funding opportunities for largely underserved populations are community development financial institutions like the Citizen Potawatomi Community Development Corporation. The Shawnee, Oklahoma-based CDFI recently received a funding award for the next fiscal year from the U.S. Department of the Treasury.

“These funds are vital to our mission of providing support, both financial and business planning, to Native American businesses,” said CPCDC Director Shane Jett. “Our organization is just more than a decade old, and we’ve established a reputation as a competent and stable supporter of doing business in Indian Country. This latest award is a reflection of that.”

In late September, the CPCDC received a $1 million award to continue its work of providing financial products and counseling services to tribal members and employees nationwide as well as Native American owned-businesses throughout Oklahoma.

The United States Treasury awarded more than $185 million to community development financing for low-income communities in late September, with $15.5 million allotted for the Native American CDFI Assistance Program, which facilitates the creation and advancement of Native CDFIs.

“With today’s awards, the CDFI Fund has crossed the $2 billion threshold in collective investments to CDFIs and Native CDFIs through the CDFI and NACA Programs,” said CDFI Fund Director Annie Donovan in a press release.

“This milestone underscores the transformative impact CDFIs are having in low-income, distressed, and underserved communities and areas of persistent poverty,” said the CDFI Fund’s Donovan. “In businesses financed, real estate developed, affordable housing constructed and improved access to the financial system, CDFIs are empowering change and revitalization in their communities.”

Since its creation in 1994, the Treasury Department’s CDFI Fund has awarded more than $2.2 billion to CDFIs, community development organizations and financial institutions.

In addition, the CDFI Fund has allocated $43.5 billion in tax credit allocation authority to community development entities through the New Markets Tax Credit Program, and $852 million has been guaranteed in bonds through the CDFI Bond Guarantee Program.

If you’re a Native American business owner, or are interested in starting your own business, please contact the Citizen Potawatomi Community Development Corporation at 405-878-4697 or visit www.cpcdc.org.