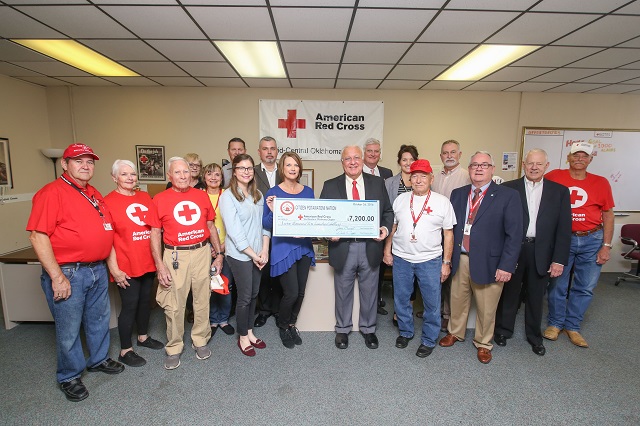 Citizen Potawatomi Nation handed over a check $7,200 to keep the doors open at the American Red Cross office in Shawnee.

“We know how important it is to have the Red Cross here,” said CPN Tribal Chairman John ‘Rocky’ Barrett. “When disaster strikes, they’re the first on the scene. They’re an important part of our community, and having them close to the people of Shawnee is critical to our city.”

In a nationwide effort to focus donors’ financial gifts on the needs of their own communities, the American Red Cross sought out community partners in Shawnee who would be willing to collaborate with the organization and supply office space. When Red Cross officials thought they might have to shut their doors in Shawnee because of a lack of donations, CPN chose to pay their rent for the entire year.

The American Red Cross provides disaster services, health and safety training, blood services and support to the Armed Forces and prides itself in providing services for clients by meeting them in the area of need.

“This is just a small example of the benefits available if a city partners with its tribal government neighbors,” added Chairman Barrett.

“Our volunteers and staff deliver our services the majority of the time by going to the client, not requiring the client to come to us,” said Lynn E. Edwards, executive director of American Red Cross serving South Central & Southeast Oklahoma. “But in some cases it makes sense to maintain office space for our volunteers to store supplies and preparedness items for a rapid response when disaster strikes. Shawnee is an example of a location we wanted to retain.”

The Shawnee community and its adjacent tribal government neighbors have been a resource for American Red Cross volunteers and staff alike for many years. Shawnee lies within the “tornado alley” of Oklahoma and has a significant number of trained staff and volunteers who quickly respond to natural disasters. It is vital for the Pottawatomie County community to maintain the Red Cross’ commitment to deliver timely response and relief to those suffering from natural disasters. This effort, coupled with the large contingent of emergency-trained tribal police officers multiplies the potential to save lives.

From small house fires to multi-state natural disasters, the American Red Cross gives people clean water, safe shelter and hot meals in their time of need. American Red Cross first aid, CPR and AED programs are designed to give first responders confidence in emergency situations with the skills that can help to save a life.

“Without the financial support CPN gave us, we probably would have closed the office, but because CPN values the contribution we are making every day in the Shawnee area, they were quick to be there for us,” said Edwards. “The result is not only that we are staying in our familiar office environment, but we relocated one additional staff member to Shawnee. In addition, we will continue to have 25-30 volunteers working from this location.”