PBA returns to FireLake for 2017 events 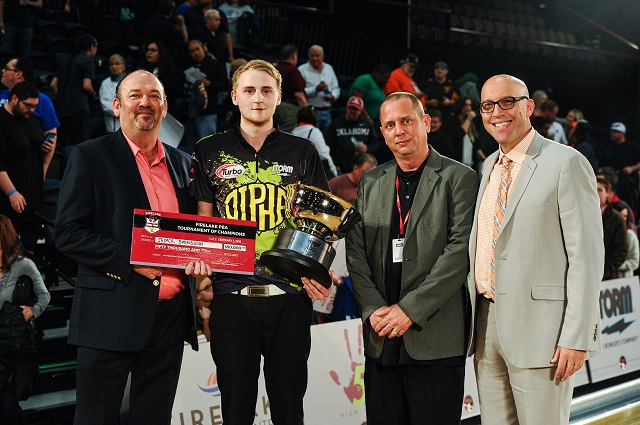 The Professional Bowlers Association’s successful relationship with the Citizen Potawatomi Nation, the Grand Casino Hotel & Resort, FireLake Bowling Center and FireLake Arena will expand in 2017 when the Shawnee-based organizations will again host the PBA’s signature event, the FireLake PBA Tournament of Champions, and add a second to-beannounced summer event.

The premier event for PBA champions will conclude on Sunday, February 19, with live ESPN coverage of the five-player stepladder finals staged in a special installation inside FireLake Arena. All preliminary rounds will be conducted right next door at the 24-lane FireLake Bowling Center. In addition to the Tournament of Champions, Grand Casino will host the annual PBA Hall of Fame dinner, and the sponsoring organizations will partner with the PBA in creating a new tentatively-titled FireLake Oklahoma Open tournament during the summer months. Dates have not yet been determined.

“Since 2014, Citizen Potawatomi Nation, Grand Casino Hotel & Resort, and FireLake Bowling Center have been outstanding partners,” said PBA CEO and Commissioner Tom Clark, “and our relationship just continues to grow. The 2015 championship finals in FireLake Arena were spectacular, one of the best venues we’ve ever had the pleasure to work with. It’s great for the PBA and its players to not only have an opportunity to return to Shawnee for the Tournament of Champions, but also for a second event we’re working on right now.”

“Our tribal leadership is a firm supporter of the PBA, and the growing numbers of spectators at events inside our facilities and on television show that support is well founded,” said FireLake Bowling Center Director Chris Skillings. “This community loves hosting the PBA, and we’re proud to bring a professional sporting event to FireLake and the Grand Casino Hotel & Resort.”