Enedina Banks, who works in the language department at the CPN Cultural Heritage Center, has committed her life to revitalizing Potawatomi ways. One way she does this is by educating the world about the language and cultural ways of the Potawatomi people, which includes encouraging mothers to feed their children the “first sacred food” – breast milk, known as dodoshke’wek in Potawatomi.

In June, Banks was photographed in her traditional regalia, breastfeeding her son Nico, on the Oklahoma City stop of the Normalize Breastfeeding Tour, which encourages breastfeeding mothers to connect to others in their communities. Banks was quoted in the Huffington Post saying “breastfeeding is not as prevalent as it once was in our communities, but we are trying and implementing programs that help normalize breastfeeding again.”

When asked why it is important for Native American women to breastfeed their children and how it preserves the Potawatomi culture, Banks responded with this heartfelt letter to explain the importance of normalizing breastfeeding. 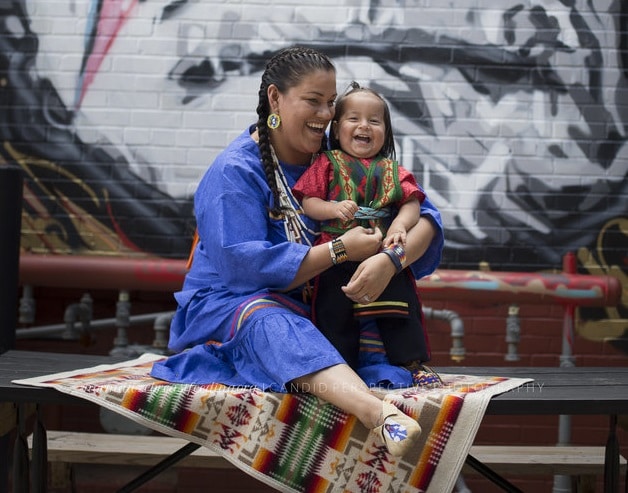 “Breastfeeding is medicine. Science is proving that when babies nurse, their latch is so strong that saliva is actually sucked back up into the mother’s body and the mother’s body can adjust to babies’ needs. Hence, if baby has a cold or an ailment, mother’s body will send extra antibodies to be passed through the milk. To me, breastfeeding has always been very calming. Science is proving your body and baby’s body releases endorphins that contribute to an overall well-being.

“We, as Neshnabe, carry historical trauma in our DNA and the only way to heal that trauma is to acknowledge it and create new ways of dealing with stress which, in turn, changes our epigenetics. I tell people all the time that my kids have nursed more often for comfort rather than for hunger, which means that they were learning how to deal with stress by seeking out their mother and knowing I would comfort them, thus strengthening the mother-child bond.

“Today, our native youth have the highest rates of suicide because they are not being taught proper ways to deal with stress. Bonding with our children was interrupted with relocations, boarding schools and the implementation of single family homes. The children of today are still feeling the effects of it. Our grandparents and great-grandparents, whose horrible experiences had brought it back to the reservations and to their homes, lost the Neshnabe ways and teachings. They brought back violence, shame and heartbreak, which turned into alcoholism to deal with their sadness and drug use to numb the pain. It has been seen as normal for Natives to be alcoholics, drug users, overweight and depressed ever since. All of these symptoms are directly affected by having no healthy ways of dealing with stress.

“When we think back to who we come from and who we are as Neshnabe people and how our ancestors raised their children, breastfeeding was part of that. Within our own tribe, from personal experiences, it was not uncommon for aunties to nurse their nieces and nephews. Within our culture, we were taught that our aunties are our other mothers and they cared for and took those responsibilities that come with being a mother. If baby needs to nurse, it was and is normal for others to nourish them.

“Sadly, American society has over-sexualized the woman’s body. It is important to get back to our original teachings. Women and their bodies are sacred life-bearers and should be respected as such. That respect for the woman’s body has been lost – so lost that even women themselves don’t respect their own bodies anymore. They are ashamed of them instead of being proud of what we are capable of. We give life and can sustain life, which is a blessing from Creator that I hope our future generations start to understand again, rather  than taking that privilege for granted.

“Keeping with tradition in this modernized world can be difficult at times. Everyone is always in a hurry and breastfeeding becomes cumbersome, but it’s necessary to strengthen that bond with baby. It slows you down and you get to cuddle while staring at what a wonderful gift Creator has blessed you with. The amazing feeling you get when you know you are nourishing their ever-growing body is what motherhood is about.

“I want to be part of the revitalization of our cultural practices, language and, most importantly, beliefs. When you don’t know who you are, it’s like a piece of you is missing. We have become so far detached from instinctual parenting, that those of us who use primal practices are ridiculed. Baby-wearing is seen as almost a fad. Breastfeeding is no longer seen as the norm but now just as an “option.” These practices were done for a cultural reason. We carried our babies for that first year because we were told to not put your baby on the ground until they are named the following spring. We breastfed because the Creator made it that way for us to nourish our babies, and we did not question it.

“Women would gather around the young girls who were becoming women and teach them about their bodies. In that time they learned how sacred it was to be a life-bearer. They learned to be self-disciplined and how to conduct themselves in a respectful way. All of the women would give pregnant women teachings of motherhood. We lack all this knowledge now, with that communal feeling. Our culture is being lost, so if I can help open someone’s eyes to something as basic as breastfeeding then that’s one step closer to cultural preservation. I’m very passionate about my work in preserving our identities. Food sovereignty, which is breastfeeding, is a huge part of cultural preservation.”

The staff at CPN Women, Infant and Children Program encourages mothers to breastfeed as well. According to Nutrition and Breastfeeding Coordinator Cheryl Richardson, the health benefits for mom and baby are many. There are over 200 components in breast milk, many of which nutritionists still do not understand their exact purpose or function. Breast milk is made of living cells and has been called “white blood” by many.

Richardson said that mothers who breastfeed have a lower risk of breast cancer, ovarian cancer and chronic conditions, like Type 1 diabetes, celiac disease and Crohn’s disease. Many have fewer problems with weight, as breastfeeding burns a lot of calories. They also get a menstruation vacation with exclusive breastfeeding – which means delayed ovulation and natural birth control for about the first six months after they give birth – and save money on formula.

CPN WIC has staff available to help with breastfeeding, including peer counselors who work with pregnant or new moms. They can also provide breast pumps and equipment depending on the woman’s need. For more information, contact CPN WIC at 405-273-3216 or cpn.news/WIC.