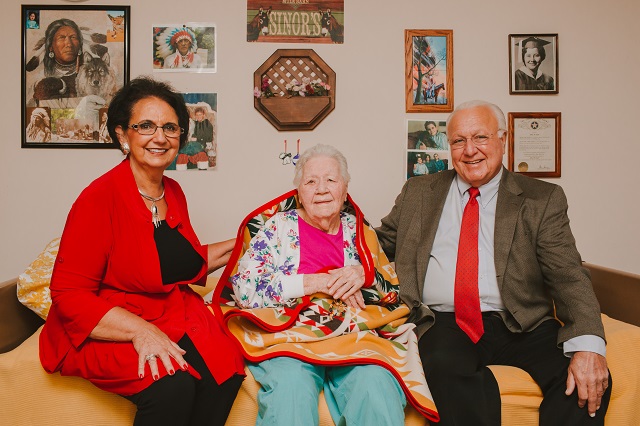 With more than 100 birthdays, one would imagine CPN elder Alta (Cargill) Sinor would have a hard time picking just one to call her favorite. Yet if you asked her on August 25, 2016 which one she enjoyed the most, she would unequivocally tell you it was her 102nd.

“This is the best birthday ever!” exclaimed Sinor when she saw CPN Tribal Chairman John “Rocky” Barrett and Vice-Chairman Linda Capps walk through the door at her party. Sinor is a member of the Wilmette family and was born in Lexington, Oklahoma on August 25, 1914.

She spoke of knowing about her Potawatomi lineage as a child, in a time when many Native Americans didn’t openly share their tribal membership. “I’m proud to be a Potawatomi Indian,” she stated in a room of well-wishers at her party. “My mother always told us we were Potawatomi Indian. She was proud of her Indian heritage.”

Though her father was not tribal, Sinor says her own pride reflects that of her mother Florence Bessie Willmette Cargill, who was never shy of her heritage. One of her fondest memories is of the tribe’s first powwow in 1974 where Sinor said she had an opportunity to see relatives and friends she’d not visited with since childhood.

Sinor and her sister Lucille, who has since walked on, were both present at the powwow where the seating consisted of hay bales. Chairman Barrett, who was at that same event in 1974, confirmed that detail.

“Things kind of improved thanks to you Rocky!” stated Sinor to a room full of laughter.

As soon as she could walk, she joined her father in the cotton fields as a picker.

“He put a string and an old gunny sack, if you know what that is, and threw it over my head. When I filled my sack up, he’d put it in his.”

She attributed her long life to being tough and hardworking, fed in part by buttermilk and corn bread, and can still describe in vivid detail of jumping out of her father’s covered wagon as it rolled up Keetonville Hill, west of present day Claremore, Oklahoma.

“My dad didn’t own a car until I was grown,” she recalled. “We travelled in a wagon.”

Sinor described traveling across the state in the days when every town was within a day’s wagon ride of one another.

“I’ve stayed all night in many a wagon yard. When we would get close to a town and the weather would get cold, every little town had a shelter and we’d pull in with the wagon and slept in the wagon.”

“It was fantastic to be invited to Alta Mae’s birthday party,” said Vice-Chairman Capps. “Just speaking to her about her life, and her experiences, it takes me back to my memories of my grandmother. I’m honored she allowed us to participate.”