Sault Ste. Marie Tribe of Chippewa Indians Chairperson Aaron Payment made a statement to U.S. News and World Report in November concerning Native American graduation rates, “We have the worst of the worst statistics… The first Americans have become the last Americans.”

Due in part to bureaucratic infighting and incompetence at the federal level, Native American students, especially those learning at institutions controlled by federal agencies, face a deficit in resources and accountability. Even when factoring in those Native students not in schools on remote reservation and tribal lands, the fact remains that only 67 percent of American Indian or Alaskan Native students graduated high school in 2015.

In a country where every person is supposed to have access to a high school education, this is a disturbing statistic. It’s even more startling when one considers that the national average for high school graduation is 80 percent.

According to a 2010 study by the Native Education Association, Native American high school students have some of the highest dropout rates in the U.S., exacerbating issues like cyclical poverty. With formal education necessary for almost any job, especially decent paying ones, it is little wonder Native Americans “have the worst statistics.”

Cherokee Nation tribal member Jason Hawk used to be one of those statistics. Originally from south Oklahoma City, Hawk went first to U.S. Grant High School before an expulsion sent him to Emerson, the alternative high school. During that time, he took on a full-time job, working 40 hours a week. In the middle of what was should have been his junior year, his work schedule changed, forcing him to pull the overnight shift from 7 p.m. to 3 a.m.

“I started missing a lot of classes. Something had to give,” explained Hawk.

It wasn’t just the work hours though. In Hawk’s recollection, the support structure wasn’t there for students like him. While he admitted that he had trouble as a student, which ultimately prompted his move to Emerson, he said students like him often received little or no encouragement from the people there to educate them.

“They didn’t really pay attention to us, you know. They knew that we were probably just going to drop out, hearing a lot of ‘you can’t do this, you can’t do that.’”

A couple years after dropping out, Hawk had established some semblance of stability. Still living on the south side, he was working in a warehouse as a forklift operator when he met his wife, Stephanie. 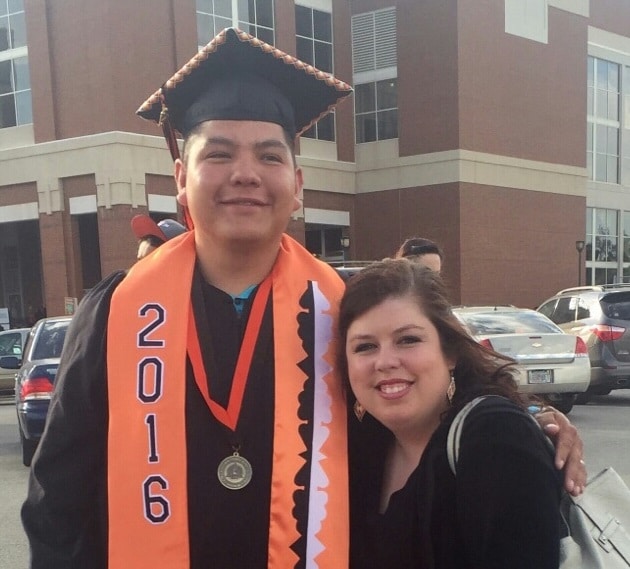 A Citizen Potawatomi tribal member and staff member in tribe’s employment and training department, she persuaded Hawk to come in and take an aptitude test for a GED. CPN’s Employment and Training Department, established as part of the federal 477 Program Initiative, is open to all members of federally recognized tribes who reside in the Citizen Potawatomi Nation tribal jurisdiction.

Its goal is to empower the economically disadvantaged, unemployed and under-employed. Its counselors assist with resume writing, job referrals, interview tips, job placement and other employment related services. The department offers assessment tests that determine the level the individual is at academically and professionally, giving staff a more accurate idea of what career track they’re suited for.

“He came in with the mindset that all he was qualified for was to drive a forklift,” recalled CPN Employment and Training Assistant Director Margaret Zientek. “So we sat him down and had him take the assesment. He scored so high that we said ‘Good God, go take the test!’”

Once he got his GED, the employment and training department helped Hawk secure a position working first in the CPN Construction Department and then the CPN Housekeeping Department. At the encouragement of his wife Stephanie, Zientek and Employment and Training Director Carol Clay-Levi, Hawk also enrolled at Seminole State College to pursue a degree in accounting.

As part of their services to Native Americans seeking career or academic training, the department staff helped Hawk apply for grants that allowed him to both work and study full time.

He excelled at his studies there, evidenced by his graduation as a member of the institution’s honor society. In addition, he was the first member of his family to ever achieve a higher education degree.

Zientek, one of his biggest advocates, was on hand at the honor society graduation banquet. Sitting near Hawk’s mother, grandmother and brother, who she described as overjoyed at seeing the first person in the family to graduate from college, Zientek said that it was an honor to be there. Despite his impressive accomplishment, Hawk decided a change of course was in order after he received his associate’s degree.

“I didn’t like accounting at all. I like working with my hands, and I couldn’t stand sitting in an office all day,” he said. “All my professors and friends told me, ‘You’re good in science and we think you’re throwing away your talents by settling with an accounting degree.’”

Hawk took a semester off to ponder which direction he’d go before deciding on a mechanical engineering degree, which he pursued at Oklahoma State University. In the spring of 2016, Hawk walked across the stage at OSU’s commencement ceremony. Since August 2016, he’s worked at Tinker Air Force Base as a mechanical engineer, where once he completes a mandatory training course, he’ll be certified to design and analyze repairs on aircraft serviced there.

Hawk’s interest in education didn’t stop when he walked across the graduation stage at OSU though. The man who once thought he was only qualified to drive a forklift was recently accepted into the U.S. Airforce’s PALACE Acquire Program which provides civilian workers full-time employment and tuition in their academic field while they study. Hawk said he’ll likely pursue his master’s degree at OSU once his one-year probationary training period at Tinker is complete.

Looking back a decade, when he took that first assessment test, Hawk says that without the employment and training department, he wouldn’t be where he is today.

“I was working in the warehouse, no education, and I could see where I was going if I stayed where I was at. I wanted to get my GED, but if I hadn’t met my wife and come into E&T, I wouldn’t have made it.”

Zientek, who has worked more than three decades in the department, was effusive of his accomplishments.

“To think what he did, going to school, working full time, and also supplementing some of the costs by learning how to bead and becoming very accomplished at that craft, it’s really incredible,” she said.

The longtime assistant director is emphatic that Hawk’s story is possible for anyone who walks through the tribal department’s doors.

“We work with everybody, and know everybody is different. The first thing we ask them is ‘How can we help you?’ and just go from there.”