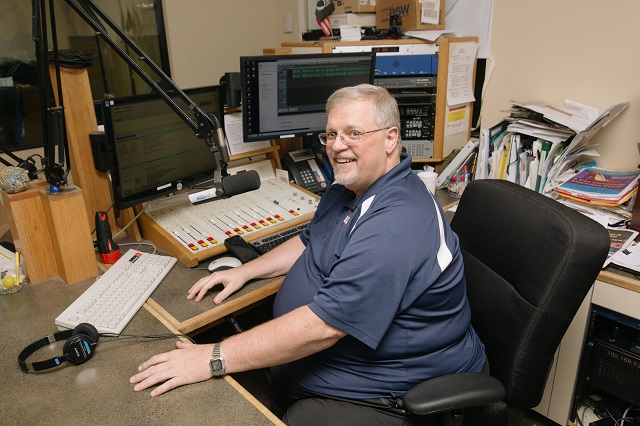 It was a long time coming, but as of midnight on September 8, 2016, listeners of Pottawatomie County’s oldest radio station can now tune in to an FM signal for a clearer, stereo broadcast of classic rock and local news.

“Good news for listeners in the Shawnee area, KGFF is now on-the-air at 100.9 FM as well as 1450 AM!” said Mike Askins, KGFF Radio general manager.

Askins, who has been on the airwaves since the 1970s, has worked strenuously since December 2015 to get the longtime AM station, owned by Citizen Potawatomi Nation, a signal on the FM band. The station is one of Oklahoma’s oldest, having been broadcasting since 1930.

“KGFF had to find an existing FM translator licensed within 250 miles of our broadcast site,” explained Askins. “Once we found a viable license, we had to purchase it from the previous owner; get FCC approval and hire FCC approved engineering services to calculate what frequencies might be available in our specific location.”

Once that was done, it still wasn’t as easy as flipping a switch to broadcast on both AM and FM. Along with KGFF staff, a contract engineer and an attorney with years of Federal Communications Commission experience, Askins then had to find a translator for sale in their range, a tower site and a frequency that met FCC requirements.

“It was a fairly stressful undertaking, but it finally paid off,” said Askins.

As part of the agreement to secure the license, Askins stated that KGFF must carry the exact programming on both the AM and FM signals.

“What the listener hears on 1450 AM will also be heard on 100.9 FM… the difference being that the FM broadcast will be in stereo.”

For a man who started with KGFF in 1976 as a student reporter, the addition of the FM signal is an exciting turn of events. Askins is a second generation disc jockey in Pottawatomie County. His father came to Oklahoma Baptist University as a student and was on the college radio station there before joining KGFF while teaching speech and English at Shawnee High School. Askins followed in his father’s footsteps, first to OBU to study church music, before focusing on public speaking and radio broadcasting.

With an extensive knowledge of the technical and historical aspects surrounding the radio business, Askins said the FM signal is the completion of a longtime focus for the station.

“The big goal has always been to get KGFF an FM signal to regain the quality of coverage lost to interference from so many electronic devices out there as well as the changes in the radio receivers over the years. If you find an old tube type AM radio from the 1940s or 1950s and listen to a properly tuned and processed signal, the quality is amazing. As radios got smaller and cheaper, the quality of materials and workmanship of the receivers for the AM band, perceived as being a talk-radio and sports-only service, got worse. The industry failed to defend the technical standards needed to keep the AM band’s audio quality competitive with FM.”

The station’s emphasis on locally-focused broadcasts, including community news and radio broadcasts of Shawnee High School and Oklahoma Baptist University Athletics, remains KGFF’s concentration. In addition to broadcasting at 100.9 FM and 1450 AM, KGFF is also streaming local sports as well as The Mike in the Morning Show on weekdays from 7-9 a.m. and The Daily Stir at 12:45 p.m. on www.kgff.com.