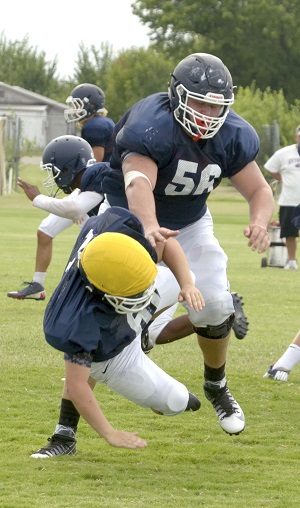 CPN members in Oklahoma have likely been reading about a Citizen Potawatomi in their local newspapers if they’re fans of high school and college football. Shawnee, Oklahoma’s Creed Humphrey made headlines in early August as he announced he was changing his college plans after initially committing to play football at Texas A&M University.

According to www.247sports.com, Humphrey is the U.S.’ number three recruit at the center position. The Peltier family member is entering his senior year at Shawnee High School and was featured in a recent profile in the state’s largest newspaper, The Oklahoman, following his participation at Nike’s “The Opening” competition. Drawing highly rated prospects from around the country, Nike hosts football skills competitions each summer to showcase their talents for college coaches and recruiters. As noted in the Oklahoman, Humphrey is responsible for calling the team’s blocking protection, meaning long hours in the film room and in meetings with coaches.

“Being ranked as a top prospect in the nation is a true blessing to me,” said Humphrey. “It shows me that the hard work that I have been putting into this sport for so long is now paying off in big ways.”

At 6-foot-5 and 310 pounds, Humphrey’s commitment to polishing his skills on the football field might only be surpassed by his dedication to his 4.0-grade point average. He explained his primary focus came in the classroom above all else. At OU he plans on majoring in business.

“I put schoolwork before athletics all the time. If I’m doing bad in class, I’ll miss a practice to make up homework and everything like that,” he told The Oklahoman’s Joe Buettner.

Humphrey’s name will likely become more familiar to University of Oklahoma football fans in the coming years, but until then, he can be found on the Friday night gridiron of Shawnee High School.