Since Gathering of Potawatomi Nations, the employees at the CPN Cultural Heritage Center have focused on completing the museum floor. Curator and Archivist Blake Norton, CHC Director Kelli Mosteller, Ph.D., and Audio and Video Production Manager Will Hogan – a member of the Chickasaw Nation – explained to the Hownikan what tribal members should expect and how the plans are coming together.

What is the vision for section two of the exhibit?

Norton: “Section two is dedicated to the traditional and cultural origins of the people. This will be conveyed via ancient oral stories and histories that are recognized, honored and told by all Neshnabek – Ojibwe, Odawa and Bodéwadmi. They will educate visitors on the origins of the world and its first inhabitants as well as its destruction and rebuilding. Viewers will learn about ancient medicines and botanicals, and how they were utilized by our early healing and spiritual societies. Spirits and the origins of our first clan-based society are central themes to these coveted narratives, in addition to the role they played in everyday life after our migration from the east coast to the Great Lakes.

“Related to each story will be satellite displays that narrow the focus and exhibit in greater detail key topics that include, but are not limited to: ancient technologies, flora and fauna, our sacred directions and the symbiotic relationships people have with the world around them.”

Mosteller: “Section two will introduce 10 Potawatomi oral traditions via short videos created by CPN staff members. They will include, but are not limited to, the Potawatomi creation story, the story of first man going out into the world to name things and the flood story.

“This somewhat serves as a bridge between sections one and three. The oral traditions of our tribe are rooted in the Great Lakes Region. The animals, plants, and other features of the stories reiterate the teachings that were given to us in the Seven Fires Prophecy, which tells that the Creator meant for the Neshnabe people to live where food grows on water (indicating the wild rice beds of the Great Lakes). This section flows over into section three that will introduce Potawatomi lifeways.”

What goes into creating one of these videos?

Hogan: “Section two will consist mostly of TV screens that will be playing videos that tell traditional Potawatomi origin stories, like the creation of the universe and the first man. We’ve had lots of discussion about the style and tone of these videos, and plan to stay close to the aesthetics of section one, not just here, but in all of the sections. Consistency is key in design and we feel it will make the sections not only feel professional but improve how they all work together to tell the Potawatomi story.

“Curator and Archivist Blake Norton selected 10 stories, and then I will transcribe them into a script-like format. This will allow Jennifer Randell and Bree Dunham at the CPN Eagle Aviary to know what to draw. In addition to the amazing things they do every day at the aviary, they have tremendous artistic ability. They will scan their drawings and send them to Trey DeLonais, a graphic artist in the public information department. He gives them color and does a lot of other editing. You can see their amazing combined efforts in the animals displayed in section one.

“For section two, Trey will provide me with versions of the art that I can use in the videos. From there I begin building audio, whether it is music, voices, sound effects, and so on, and animate the artwork to the audio. It is a daunting task for a staff of this size but I believe the end results will speak for themselves.

“From Jennifer and Bree’s drawings, Trey’s digital work, and my production, these videos will be produced 100 percent at CPN by members of a Native American tribe. I think that’s an important fact because it means these stories will be treated with the seriousness and reverence that they deserve, and they will be told from an authentically native point of view. I believe that’s the most important thing that we do here at the Cultural Heritage Center, and it means a lot to me personally as well.” 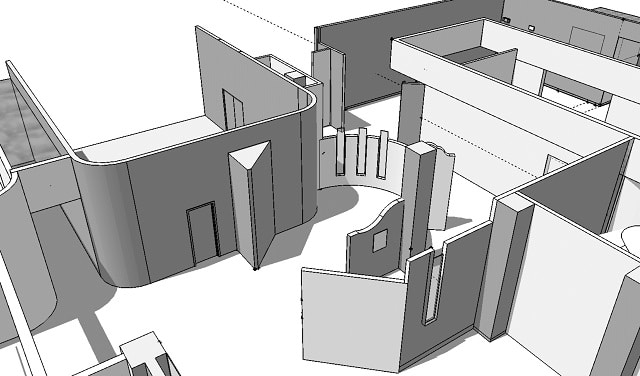 What is the vision for section eight?

Mosteller: “Section eight will focus on our time in Kansas. There are many social and political changes in this time period, which ranges from the mid-1830s to the early 1870s. Some of our themes will include the consolidation on Kansas River Reservation, the treaties of the 1860s, leadership, the difficult transition to a new way of life on the plains and national events that were impacting our ancestors, like the Civil War and the Oregon Trail running through the Kansas reservation.”

To learn more about the progress of the museum construction and cultural heritage center activities, please visit www.potawatomiheritage.org.