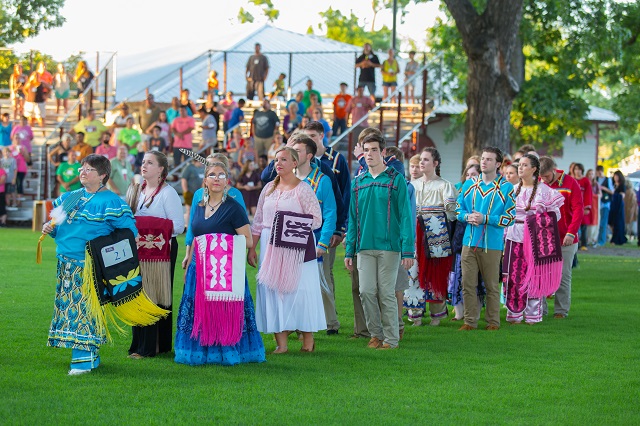 By August 1, the Potawatomi Leadership Program students will be packing their bags and heading back to their hometowns after a six-week internship that taught them the ins and outs of the Citizen Potawatomi Nation. The award-winning program brings a group of 10 young tribal members from around the country to Shawnee, Oklahoma to learn about the government, culture, and economic development of CPN.

This year the participants came from North Carolina, Virginia, Oregon, Kansas, Arizona, Vermont, California and Oklahoma. The PLP arrived on June 17 and dove right into tours, introductions and the Family Reunion Festival.

At its core, the PLP strives to give young tribal members an accurate perception of the Citizen Potawatomi Nation as a whole and cultivate talent from within to ensure that younger generations are prepared for a role in the future governance of their tribe.

The PLP has a sponsor each year who has been through the program in the past. Isaac Morris – a 2014 PLP participant – filled this role for a second year. His duties included creating a schedule for the PLP, taking them to all of their activities and living in the Sharp House with the group. He explained that these 10 students were unified, engaged and asked an abundance of questions.

“They are great leaders. I think they will be sitting in those legislator chairs in the near future and bringing about change in their communities back home,” Morris said.

His advice to incoming participants was to keep an open mind and be ready to learn, urging them that the experience is what they make it. Even though the typical weekday for the students is 8 a.m. to 5 p.m., meeting with different departments at CPN, the students also had time to rest and explore the area.

“There was always so much laughter and smiling in the [Sharp] house,” Morris said. “They had a great time!”

Margaret Zientek worked as the PLP house mom during the summer. She moved into the Sharp House, which boasts two flat screen TVs, a pool table and an outdoor pool, and acts as a listening ear, protector and regalia maker. She said she believes that what the students learn as they complete the program is much more than the teachings and events. They build lifelong friendships and share responsibilities while living together.

The 10 participants are responsible for all of the cleaning, cooking, laundry and maintenance of the house. Each must share a room and bathroom with at least one other person. This teaches them to adjust to other people’s preferences and schedules while being accommodating and sensitive to others.

CPN provides each participant with a piece of regalia, which Zientek sews for them. Men receive a ribbon shirt and women get a shawl and one other item – their choice of a skirt or blouse. There is a regalia questionnaire in the PLP application and Zientek expressed that she learns a lot about the students as she builds their regalia.

“It amazes me how every year the regalia comes together and each piece matches its owner perfectly,” Zientek said.

She also explains that this year’s group has bonded very well. Their age differences span only eight months, but their interests and backgrounds are very broad.

Thomas Brunt – a Tescier family member – is studying environmental science at the University of Pittsburgh and hopes to work for CPN in the future.

“During this experience I expected to make good friends, learn a lot and hopefully secure an internship,” Brunt said. “I really enjoyed going around to all of the departments, especially the environmental department.”

Matthew Clift, who is a member of both the Ogee and Weld families, had the shortest distance to travel to experience the PLP. His hometown is Cushing, Oklahoma, but he is currently studying history education at East Central University in Ada, Oklahoma. Clift’s favorite experience from the PLP was the dancing at Family Reunion Festival.

“I wanted to attend the PLP because I wanted to learn more about my tribe and be a part of it,” Clift said. “I hope
to make lifelong connections and be influential for my tribe.”

Anderson family member Katherine Smith attends Moorpark College and hopes to become a veterinarian or exotic animal trainer in the future. Following in the footsteps of her brother Nick from Simi Valley, California, Smith wanted to gain appreciation for the tribe that her older brother learned from the program.

“I really enjoyed the eagle aviary; the eagles are amazing and the women who work there are really kind and know so much,” Smith said. “All of the spiritual aspects of the tribe have been great to learn too.”

Alyssa Frey, who has roots in the Denton and Boursaw families, hails from Manhattan, Kansas and attends Kansas State University. Frey is studying social work, ttheater and leadership and hopes to become a drama therapist. She sees the PLP as a good networking opportunity to learn about culture and who she is.

“I wanted to come to the PLP because before I got here I didn’t know anything about my Potawatomi culture and heritage. It’s been amazing to learn about it and meet all these cool people,” Frey said. “My favorite part has been learning about the history of our tribe and the language.”

Boursaw family member Sage Hanson is studying supply chain management and sustainability at Arizona State University. His future plans are to assist companies to purchase supplies that are less harmful to the environment. Hanson expected to gain leadership skills and connections with the people in the program with him during his summer in Shawnee.

“I chose to attend the PLP because I was looking for a way to gain leadership experience as well as get in touch with my heritage,” Hanson said. “My favorite part has been the people; I think I’ll be able to keep in contact with a lot of them afterward.”

Oregon State University business student Aden Eilers is a member of the Anderson family. He made the furthest trip to the PLP from Lake Oswego, Oregon. Eilers sees the PLP as a good opportunity that has impacted his future more than other summer internships or jobs could.

“We went to the police station and met all of the officers,” Eilers said after being asked what his favorite part of the experience has been. “We also met with Iron Horse Industrial Group; I never knew that the tribe did any international business so that was eye-opening.”

Bergeron family member Randy Bazhaw studies civil engineering at North Carolina State University. After his grandfather Ralph introduced him to the PLP, Bazhaw saw that it was a once-in-a-lifetime opportunity to learn about his culture and heritage. He describes the friendships he has built with the other participants as a family.

“I have enjoyed the cultural teaching and learning the language because it makes me feel like I’m connected to my heritage,” Bazhaw said. “I expect to get a deeper understanding of who I am and what it means for me to be Native American. I also want to learn how I can help the Citizen Potawatomi Nation in the future.”

Aaron Stevenson – a Yott family member – is from Tahlequah, Oklahoma. He studies computer engineering at Oklahoma State University and his favorite part of the experience was learning about the Iron Horse Industrial Park.

“I wanted to attend the PLP because I wanted to learn more about the history and culture of the Potawatomi,” Stevenson said. “I wanted to gain an increased appreciation of the tribe as a whole.”

Frigon family member Susannah Howard is from North Thetford, Vermont. She attends Smith College in Northampton, Massachusetts, where she majors in geosciences, landscape studies and Native American studies. Howard hopes to work for CPN one day and used this experience to get more familiar with the opportunities available.

“My favorite experience has been making connections with the legislators, directors and fellow PLPs,” Howard said. “I hope to find out how being a Native American in the 21st Century will impact my life.”

Zoe Gustason, who is a Rhodd family descendant, is studying psychology at Sierra Vista Community College and hopes to work with children who have endured traumatic events. She describes her experience living with the PLPs in the Sharp House as a family.

“I wanted to attend the PLP because even though I am Native American, I didn’t know much about my heritage,” said Gustason. “I hope to use what I have learned to share with others when I go back home.”