A growing family at the CPN eagle aviary 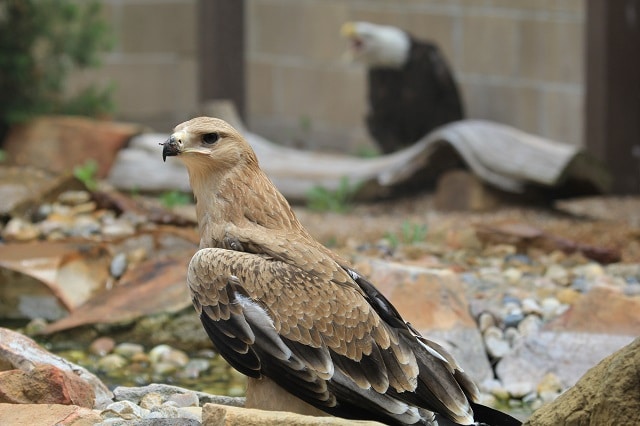 The CPN Eagle Aviary has a new resident: a tawny eagle chick, which is normally found in African countries. After two bald eagles – Kyla and Charlie – were unsuccessful in hatching eggs of their own, aviary staff partnered with another Oklahoma aviary to make them parents. This is the first time on record that bald eagles have raised a tawny eagle chick.

Like all of the birds at the aviary, Kyla has a unique story. She came to the aviary in 2012 from Kyla, Montana, after spending most of the first two years of her life improperly housed. Two months after the aviary opened in 2012, staff got a call from U.S. Fish and Wildlife Services after law enforcement confiscated several eagles. When Kyla was found, she had been in a large kennel for an extended period of time. She had worn the feathers off of a portion of her wings and had calluses from turning around in the kennel. After she was injured as a fledgling, a wildlife rehabilitator began to work with Kyla in hopes that she’d someday be able to live on her own again, but she was unsuccessful.

“We weren’t provided with much of the bird’s history because of the situation, but Kyla had likely fallen out of her nest as a chick and had several unrepaired breaks in her left wing,” Aviary Manager Jennifer Randell said. “After six months, a rehabilitator must make the decision whether to put an eagle down if it cannot be fully rehabilitated or find placement in a long-term care facility. The rehabber, in this case, probably found it too difficult to put the eagle down. She had good intentions by sparing the eagle, but was in a very tough situation because her permits had lapsed and she no longer had a place to adequately house the eagles.”

“On the trip back, I had to sit in front of the kennel door with her to keep her from becoming overly stressed because if I got out of her sight you could see her becoming nervous. When we got her into the enclosure in the aviary, she wouldn’t get out of the cage because she had been living in one for quite some time. Usually when we open pet kennels for birds, they run or fly out immediately, but not Kyla. I had to get on my hands and knees to coax her out and I was overwhelmed with emotion because of the state she was in,” Randell said.

The birds at the aviary get a whole food diet, which means they get fur, feathers and bones like they would in the wild, but for the first two months, staff had to dice Kyla’s food into small portions.

“When we attempted to feed her, she couldn’t eat whole food,” Randell said. “She almost choked at first.”

For the first month, she stayed in a five by five foot square within the new enclosure.

“One day, the water misters came on and she could feel the water in the breeze and she started to paddle her wings. Dancing around in circles, she happened to put her foot in the running water in the enclosure,” said Randell. “It’s possible that Kyla had never been in water before, especially running water like a stream, because she fell out of her nest when she was so young. When she got into the stream for the first time, she ran up and down like a child splashing in the pool. We cried again.”

After this, it was clear her spirit was no longer broken. Her Potawatomi name, Kche-Gizhek, means Big Sky. She was given that name as a reminder of where she comes from but the name fits much more than that, said Randell. Out of the five birds in the enclosure, she became the dominant figure and mother hen. She has a huge personality.

Kyla was a young bald eagle – or sub-adult – when she arrived and is now the largest eagle, weighing in at 14 pounds. The smallest male at the aviary, Charlie, who weighs about six pounds, took to Kyla almost immediately and followed her around the enclosure.

“Kyla, being a young eagle, didn’t know why he was bothering her. She even pulled one of his tail feathers out. Last year, Kyla’s head turned white, which is a sign of maturity that usually happens around age five, and she finally understood why Charlie was following her around. They built a nest together and Kyla laid eggs, but they were unfertilized.”

Randell noted that eagles living in captivity don’t normally nest build or lay eggs, so it is encouraging to know that they feel comfortable enough in the aviary’s environment to do this. This year, the pair laid eggs again. Although one broke, another seemed like it could be viable. The staff at the aviary spoke to U.S. Fish and Wildlife about getting permits to allow these birds to breed in captivity.

Randell told the Hownikan that the pair were great parents and incubated the eggs perfectly. In 35 days, the amount of time a bald eagle egg takes to hatch, the eggs did not hatch. On day 35, Kyla brought food to the unhatched eggs, as if she knew she was supposed to have a chick. She went into a mourning process where she didn’t eat and threw her head back and yelled for almost five days. It was then that the staff knew that Kyla needed to be a parent.

Randell contacted William Voelker at Sia: the Comanche Nation Ornithological Initiative, in Cyril, Oklahoma. Voelker had a 10-day-old tawny eagle that wasn’t doing as well in the incubator as he would have been if raised by parents. Tawny eagles are an exotic species, originally from Africa. Sia houses exotic species whose numbers are being threatened in the wild, along with other native birds.

The staff at Sia and the CPN Aviary agreed to let Kyla raise the chick. This was a big risk because the chick could fit in the palm of one’s hand. Kyla also never had raised a chick before, and staff did not know how she or Charlie would react or if even accept him. One false move could have proven fatal.

On April 13, CPN aviary and Sia staff removed the eggs and put the chick in Kyla and Charlie’s nest. 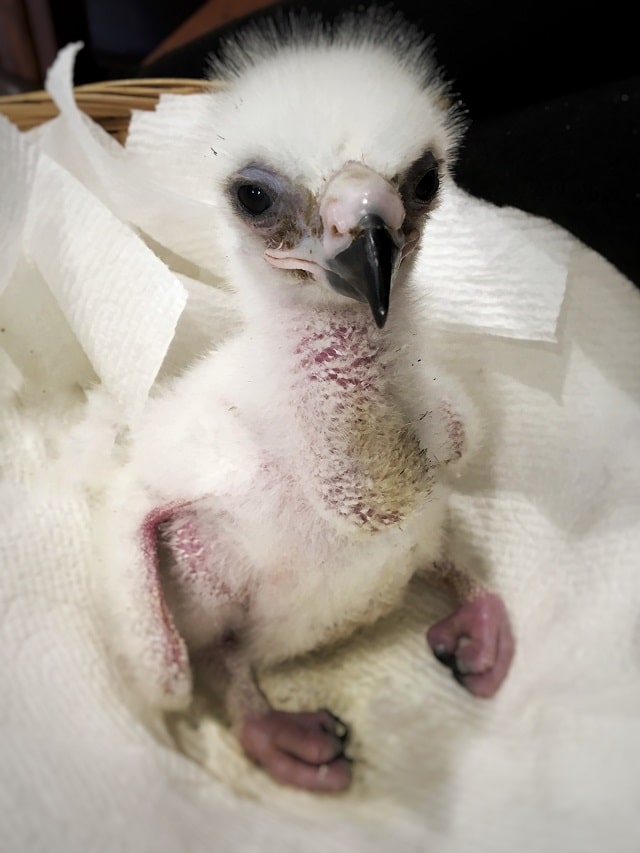 “Once safely out of the enclosure, we all waited by the door, watching the camera feed, ready to intervene if things did not go well. Kyla came charging back to the nest but quickly stopped when she saw the chick. Our hearts were nearly pounding out of our chest,” Randell said. “Once she got close enough to the chick, he instinctively moved towards her to get warm. Once they touched it seemed like something just clicked. Kyla got around the chick, gently covering him. We cried. After seeing that Kyla was brooding the chick perfectly, we waited nearly three hours to see if she and Charlie would feed him. The chick had to eat soon or we would have to remove him. Finally, after what seemed like forever, Charlie brought food to the nest. Kyla fed the baby and, of course, we all cried again. It was a beautiful moment to see their natural instincts come to life in such a fragile moment.”

The family has been thriving in their enclosure at the aviary. The chick is nearly as large as Charlie and has begun to fly. Tawny eagles have a 77-84 day fledging period when chicks learn to fly and fend for themselves. After that period, there is a plan to remove the eagle from the enclosure as would naturally happen in the wild. Since the bird will be fully-flighted and his species is threatened, it will likely be used to support breeding efforts of this beautiful creature.

Check cpn.news/eaglevisions frequently for updates about this chick, our eagle residents and the visitors that come to see us at the aviary.