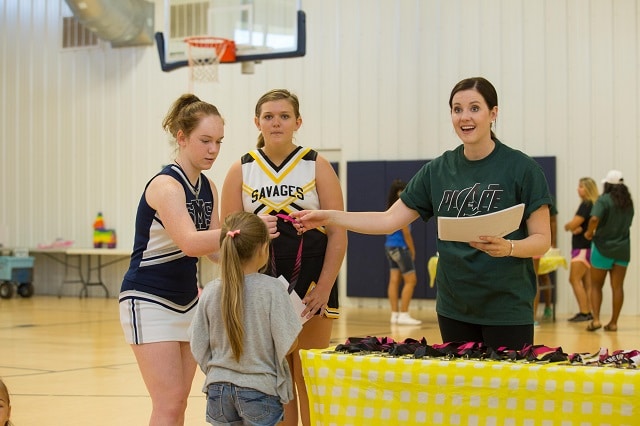 Those who have attended tribal powwows have probably recognized the importance of dance in the Potawatomi culture. The tradition has been passed down for hundreds of years as part of cultural ceremonies and celebrations.

On July 18-22, Kaylee Keith-Morrison, a Whitehead, Anderson and Smith descendant, hosted a cheerleading and dance camp for area tribal youth at the PLACE. By practicing one hour each day, Keith-Morrison’s goal for the girls participating in the camp, whose ages ranged from four to eight years old, was for them to go home and show their families what they learned that week. She wanted parents to see that their kids were engaged in an activity that doesn’t require technology.

During the camp, they were taught several cheers and dances. Keith-Morrison said she wanted to give back to CPN because the tribe does so much for its members. She called Tribal Youth Director Darin Greene to extend the offer to teach her cheer and dance talents to campers.

“From health services to scholarships and even helping out with living arrangements, the tribe does so much for its people,” she said. “I wanted to give back, but at this point of my career I can’t always write a check. However, I can use the gift of dance to teach students from another part of the country something that I’m passionate about.”

Since graduating with a degree in dance from West Texas A&M University in Canyon, Texas, Keith-Morrison has danced professionally in “Texas” the musical at Palo Duro Canyon and for the San Antonio Spurs. Currently she is an educator in the Texas public school system, where her students have encouraged her to learn native Potawatomi dances.

“Many of my students are refugees from Burma, Somalia and Laos. Each of them knows the native dances from their culture and they have encouraged me to learn mine as well,” Keith-Morrison said. “Since I grew up in Texas, I wasn’t able to connect to the place where my ancestors are from, but I’m glad to be sharing my gifts in the region where so many generations of my family lived.”

The financial assistance the tribe provides motivated Keith-Morrison to take advantage of that opportunity by going to graduate school to enhance her role as an educator.

“Dance has given me a purpose. There is always a goal or something to work for. As a little kid, I was striving to learn something new and even as a dance educator, I’m always working toward goals with my students.”

Most of the 15-20 students in the cheerleading camp were from the CPN Child Development Center and each of them received a medal for completing the camp. When asked what their favorite part of the camp was, there were many shouts of “Pizza! Dancing! Stretching!”

For more information on the activities available for tribal youth, please contact Greene at dgreene@potawatomi.org.