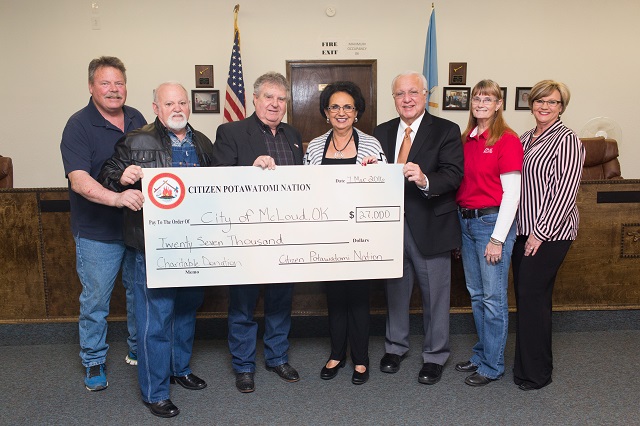 Tribal leaders met with the City of McLoud to gift $27,000 of tribal sales taxes to the city from the operations at Quail Ridge Sporting Clays. Tribal Chairman John “Rocky” Barrett and Vice-Chairman Linda Capps were on hand to donate the funds. The clay shooting operation sits on CPN tribal trust land and operates under the U.S. HEARTH Act.

“We appreciate how much the City of McLoud has done as a partner with the Nation,” said Tribal Chairman John “Rocky” Barrett. “The people of McLoud and the surrounding communities patronize this business while the city’s infrastructure and emergency responders are responsible for helping make it successful. These funds are a way to return that investment.”

“We’re going to put the money toward infrastructure that the city needs, including our sewer and water lines that are in need of updating,” said McLoud Mayor Stan Jackson. The mayor said that CPN and city had been good neighbors in the past due to the proximity of tribal enterprises like the Grand Casino Hotel Resort to McLoud. He said he looked forward to future collaboration as well.

“I really do hope so, because that’s my goal as mayor. We’re always open to hear what Chairman Barrett and Vice-Chairman Capps have to say. They have been a big help to our city, especially with the upgrades to our park and the Wahpepah Walking Trail.”

City Manager Buck Day affirmed that the city government was working towards infrastructure improvements for the town of 4,500, noting that the long-term goal is to grow utility services towards the busy I-40 corridor located inside the city limits. In fact, funds from the sporting clays tribal sales tax receipts gifted to the city have already paid literal dividends. On April 19, a city sewage line collapsed outside the Mable Bassett Correctional Facility, whose sewage service is supplied by the City of McLoud. Day said the city used emergency grant funds from the Oklahoma Water Resources Board, Central Oklahoma Economic Development District and $35,000 gifted from CPN’s tribal sales taxes to help fix the line serving 1,200 inmates and staff.

“The CPN money was great,” said Day. “Just looking at it from the city’s point of view, that money would have to come from somewhere else.”

“I’ve known the Rocky and Linda for years, and to be honest with you I couldn’t ask for anybody to be any more helpful than they have been. Rocky’s ideas and our ideas for the City of McLoud pretty much run parallel to one another. The same thing that we want and think is good for us, he thinks is good for the tribe.”

CPN-McLoud collaboration has been a boost to both entities in recent months. FireLake Express Grocery McLoud, located just north of Interstate 40 on McLoud Road, opened in spring 2016.

“The Nation is very excited for our newest enterprise, FireLake Express Grocery McCloud, to offer services to the city. It’s the first time since the late 1960s when Seikel Groceries closed that they’ve had a grocery store here,” noted Vice-Chairman Linda Capps.

Quail Ridge Sporting Clays is located at 2401 S. McLoud Road (Highway 102 North), McLoud, Oklahoma 74851. It offers several shooting options including 5-stand, Wobble Trap and Sporting Clays. Reservations can be made at http://quailridgeclays.com or by calling 405-306-1578.