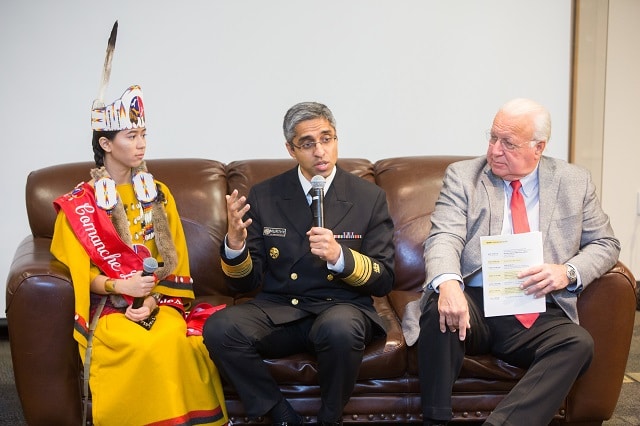 In an effort to combat the rising tide of opioid abuse plaguing the nation, U.S. Surgeon General Vivek Murthy visited with tribal leaders and healthcare professionals during a visit to Oklahoma. Sponsored by the Southern Plains Tribal Health Board based out of Oklahoma City, Surgeon General Murthy visited with tribal youth from across the state at the CPN Cultural Heritage Center for a town hall and discussed prevention programs they are developing in their communities.

“I was so impressed by the young adults we met here today,” said the surgeon general at a press conference following the town hall meeting at the CHC. The IAMNDN Program, which is now being developed in four different tribes…through it the students are using culture as a powerful tool for strengthening their communities and making people healthier. They’re essentially telling people to choose culture over substance abuse.”

The IAMNDN Program is a community and cultural based initiative aimed at bridging the gap between different generations of tribal youth and adults. The program’s focus on developing lines of communications between these generations has been especially important in the effort to curb the growing epidemic of opioid, prescription pill and heroin abuse ravaging Native American communities.

The surgeon general noted that overdose deaths had become an acute problem in the past fifteen years, with the national average nearly quadrupling. Oklahoma is particularly impacted by the issue, ranking fifth-highest in the nation for drug overdose deaths according to 2013 figures from the Centers for Disease Control and Prevention. Oklahomans face a particularly difficult time getting help in getting treatment for addiction. In a year in which the state legislature struggled to close a $1.4 billion budget shortfall, The Oklahoman’s Jaclyn Cosgrove noted that the state-funded residential substance abuse treatment program had a waiting line 600 people long.

Before the meeting at the heritage center, Surgeon General Murthy visited the Absentee-Shawnee Health Center in Little Axe, Oklahoma and met with a number of tribal leaders from Oklahoma tribes about these issues. The occasion was a first in American history, with Surgeon General Murthy being the first official in his position to meet with Native American tribal leaders.

“I want people to know that the health of American Indians matters. It matters in a global sense, but it matters for America because we as a country can’t be strong if our people are not healthy,” concluded Surgeon General Murthy.