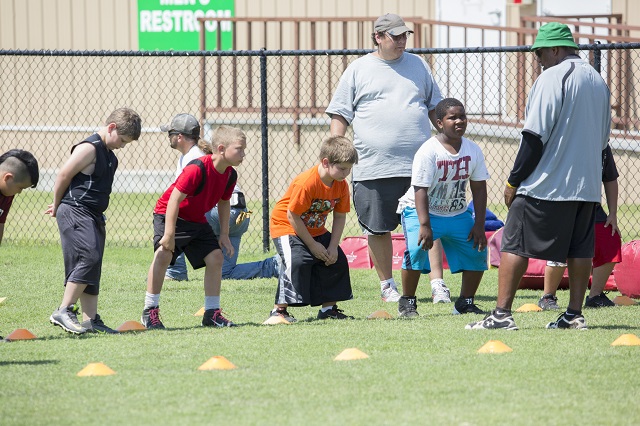 Though the temperatures were high and the mid-summer days long, more than 120 youth showed up at FireLake Ball Fields to participate in the annual Day of Champions Camp. The camp was hosted by Citizen Potawatomi Nation and Day of Champions Inc., which was founded by former collegiate football coach Ken Heupel and son, Josh, the 2000 national champion from the University of Oklahoma and current offensive coordinator at the University of Missouri. Campers comprised of Potawatomi tribal members and children of Tribal employees gather at FireLake Ball Fields to take part in the now annual tradition of the Day of Champions Football Camp.

Coming just one day after the annual CPN Family Reunion Festival, tribal staff members led by FireLake Wellness Center Fitness Trainer Sarah Lawerance took on the responsibility of getting the complex ready for 128 campers and several coaches. Through her long affiliation with the Josh Heupel 14 Foundation, Lawerance has played an integral role in keeping the camp running at CPN during one of its most busy times of the year.

“To see kids that are now too old to attend but want to come back and be a part of the camp because they believe in the four main principals that are taught, it is fantastic,” said Lawerance.

Coaches center all activities and instructions around the camp’s four main principles; discipline, trust, respect and hard work. The examples they give are as simple as showing that discipline can mean being the student sat at the front of the class, or saying “please” and ”thank you” as signs of respect.

“We had a man who came to camp 12 years ago and was going down the wrong path. The coaches helped change his point of view and this year, he brought own his son because he wants him to stay on the right path and learn the same things that he did,” noted Lawerance.

Though Day of Champions began as a football skills camp for elementary school-aged participants, in the past two years it has included a softball skills camp to incorporate more girls in the two-day event. Thirty participated in the softball camp activities this year, with 98 working on their gridiron skills.

Coaches and campers also got an added bonus this year, with Lawerance working with the staff of the CPN Eagle Aviary to arrange a visit for attendees. They were joined on the visit by some of the CPN tribal legislators who were still in town from the Family Reunion Festival.

“It was an incredible experience. They were blown away with the history of the eagle and learning about the history of Native American culture. To have the legislators and coaches there together, it really brought home that this camp means so much to the campers, parents, and the Nation.”