The Potawatomi at Council Oak 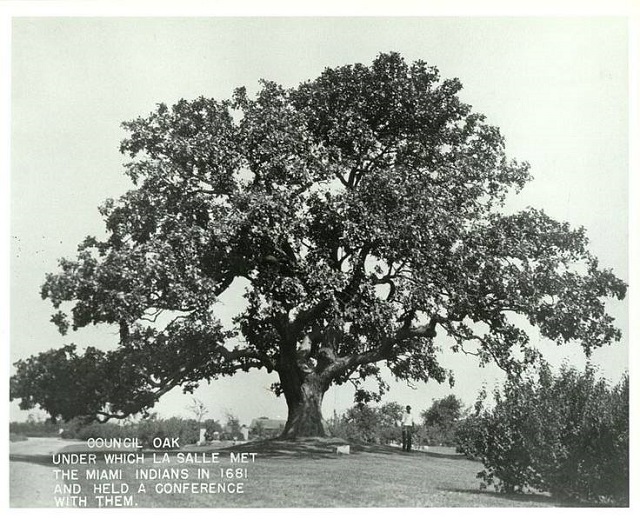 The long history of the Citizen Potawatomi Nation contains many way points and historically significant places. One can find historical monuments scattered across the American Midwest along the Potawatomi Trail of Death in the states of Kansas, Missouri, Illinois and Indiana. A lesser known site, now lost to the ages, was the Council Oak.

The Council Oak stood in South Bend, Indiana for centuries. Some estimates claim it was at least 100 years or older when Europeans first arrived in the area in the late 1600s. In 1681, the French trapper and trader René-Robert Cavelier Sieur de La Salle called for a council of the Great Lakes tribes in the area to discuss the encroachment of the Iroquois. The council included Potawatomi, the Miami, the Illinois and others. The Potawatomi had a standing relationship with La Salle dating back to the 1679 establishment of a fur trading partnership with Potawatomi Chief Onangises (Shimmering Light). The meeting reportedly took place under the Council Oak because it was such a pronounced and recognizable landmark in the area.

The treaty granted La Salle freedom of exploration along the Kankakee River, a feeder into the Mississippi River, and the wider areas controlled by the tribes meeting at Council Oak. This right of exploration eventually led to the French claim to the territories known as Louisiana. A later arrival, Pierre Freischutz Navarre, married a Potawatomi and established the region’s first trading post at modern day South Bend, Indiana. In the WPA’s guidebook to Indiana history, authors from the Federal Writers’ Project note that his wife was represented in Potawatomi tradition “as having been exceptionally intelligent.”

Soon after the Great Lakes tribes put their issues with one another aside to form an alliance and key French fur traders in order to keep the Iroquois and their allies from encroaching on the fertile fur trapping lands around the lakes.

For the Potawatomi, the meeting at Council Oak was a significant turning point in the tribe’s history as well as early colonial American history. This shift in strategy set the stage for tensions and alliances that would lead to several wars in the 18th century between belligerent tribes and French and English colonial forces. The French usually sided with the Great Lakes tribes and the British often sided with the Iroquois, though it was not uncommon for the Europeans to play the region’s Indian nations against one another when it furthered their causes.

Despite surviving two lightning strikes in the 20th Century, the tree was finally felled by a tornado in 1990. Today, only a massive stump remains in South Bend’s Highland Cemetery. A plaque there commemorates the tree. The Navarre name is still featured in modern day South Bend, with Navarre Street named after the famous Frenchman, while the family name remains a common one amongst today’s Citizen Potawatomi.