Tribe honored as one of Oklahoma’s most charitable organizations 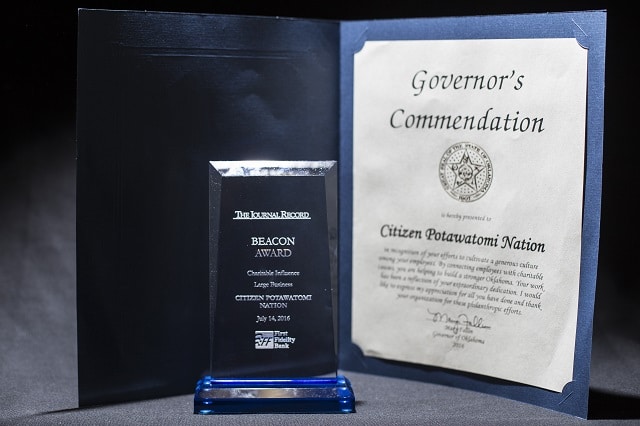 Citizen Potawatomi Nation has again been recognized for its charitable influence, receiving an honor at the annual Beacon Awards hosted by the Journal Record newspaper.

“With the economic downturn and belt-tightening throughout the state, nonprofits have also taken a hard hit to their revenues,” said Joni Brooks, president and publisher of The Journal Record. “That made the Beacon awards even more special this year. Our honorees continued to give and encouraged their employees to give of their time, serving as shining examples to all businesses about the positive impacts they make to the nonprofits they choose to work with. Together with our partners, First Fidelity Bank and the Oklahoma Center for Nonprofits, we congratulate and thank our Beacon Award honorees for all they’ve done and continue to do.”

The tribe was among more than two dozen honorees recognized at the Beacon Awards event. Other honorees were Blue Cross and Blue Shield of Oklahoma, Enable Midstream Partners, the Chickasaw Nation, Delta Dental of Oklahoma and the American Red Cross of Central and Southwest Oklahoma.

“To be recognized among so many great Oklahoma organizations for charitable work in our communities is a real honor,” said Brad Peltier, CPN Executive Operations Coordinator. “The Nation, its members and employees take pride in giving to our community, our neighbors and those in need. We are thankful for being recognized for such an award.”

With more than 2,300 employees in its commercial enterprises and tribal government programs, the tribe is the largest employer in Pottawatomie County. The vast majority of these individuals live and work in the communities near the tribal jurisdiction, meaning the presence of charitable services and civic engagement directly affects their families, friends and neighbors.

“Citizen Potawatomi Nation’s charitable giving efforts are part of a larger strategy to operate tribal government, commercial and philanthropic efforts for the betterment of the entire community in Pottawatomie County,” added Peltier. “This strategy has been developed in line with Tribal Chairman John ’Rocky’ Barrett’s ethos that a rising tide lifts all boats.”

“By supporting charitable giving efforts, CPN’s objective is to foster a deeper investment in the people that patronize its businesses, work in tribal programs and grow the overall economy of Pottawatomie County, Oklahoma,” said CPN Vice-Chairman Linda Capps.

Tribal-owned enterprises make significant charitable contributions in the area, including providing food and grocery donations at cost to area nonprofits including the Shawnee Rescue Mission’s food pantry and the Salvation Army’s weekly soup kitchen. In addition, gaming enterprises such as the Grand Casino Hotel Resort host events such as an annual toy drive and fundraiser with the proceeds and gifts are donated directly to local youth and families that are in need.

In 2015 alone, employees donated more than 1,274 pounds of food for full Thanksgiving dinners to 175 families in the CPN service area, which encompasses most of Pottawatomie County and parts of Cleveland and Oklahoma counties.

Through these and numerous other examples, the tribal leadership encourages the spirit of partnership and investment in fellow community organizations that benefitted the tribe and its people so many years ago.

For the most recent fiscal year, Citizen Potawatomi Nation donated more than $2.9 million to the local community. Donations from CPN tribal car tag sales to Oklahoma schools were more than $273,000 in this same period. Through the tribal rolls department, more than $5 million in scholarships were awarded.

“Even in the best economic times, the roles that civic and charitable organizations play in a place like Pottawatomie County, Oklahoma cannot be understated,” said Vice-Chairman Capps. “By supporting these organizations, Citizen Potawatomi Nation and the entire community benefit in the long run.”