Since 1972, the Citizen Potawatomi Nation, or as it was known until 1996, the Citizen Band Potawatomi, have hosted a late-June celebration of Native American culture. The inception of what was then an intertribal powwow and general council meeting started off as a way to enhance Native traditions amongst Potawatomi and address the governmental business of the tribe. The tribal government’s newspaper, this publication, has chronicled the event’s course along the way. Below are a few notable excerpts from this timeline.

1974
Officially, the former Citizen Band Potawatomi Inter-Tribal Powwow began in 1972 following the tribe’s general council meeting held at St. Gregory’s College. As a June 1974 How-Ne-Con article put it about that year’s upcoming event, “…we are looking for another good turn-out this year. After the Council Meeting there will be a Pow-wow and feed at the Tribal Community House, south of Shawnee. The Pow-wow should begin around 5:00 p.m. and last until everyone is ready to go home.”

According to the paper, hosting the 1974 powwow were “Mr. A.B. Pecore, Mr. LeRoy Neddeau and the Shawnee Inter-Tribal Gourd Clan.”

1986
On page 3 of the June 1986 edition of the How-Ni-Kan, a sample ballot for that year’s elections was printed. Doyle Owens, running for the position of vice-chairman, and Kenneth Peltier, candidate for secretary-treasurer, both ran unopposed. There were a wide range of judicial nominees in 1986, some of whom are legends in Native American legal circles including Lawrence Wahpepah, F. Browning Pipestem, Bill Rice and current CPN District Court Judge Phil Lujan.

1991
The front page of the June 1991 tribal paper described the plans for the “Potawatomi Days,” including the “18th annual Citizen Band Potawatomi Pow Wow.” As the paper reported, “Pow Wow Chairman Orval Kirk expects a big turn-out of dancers competing for $15,000 in prize money.”

Echoing a familiar theme of providing an escape from the mid-summer Oklahoma heat, the article encouraged attendees to visit the Potawatomi Bingo Hall where on Saturday “the real excitement will come at night when the bingo hall gives away a 1991 Geo Metro.” 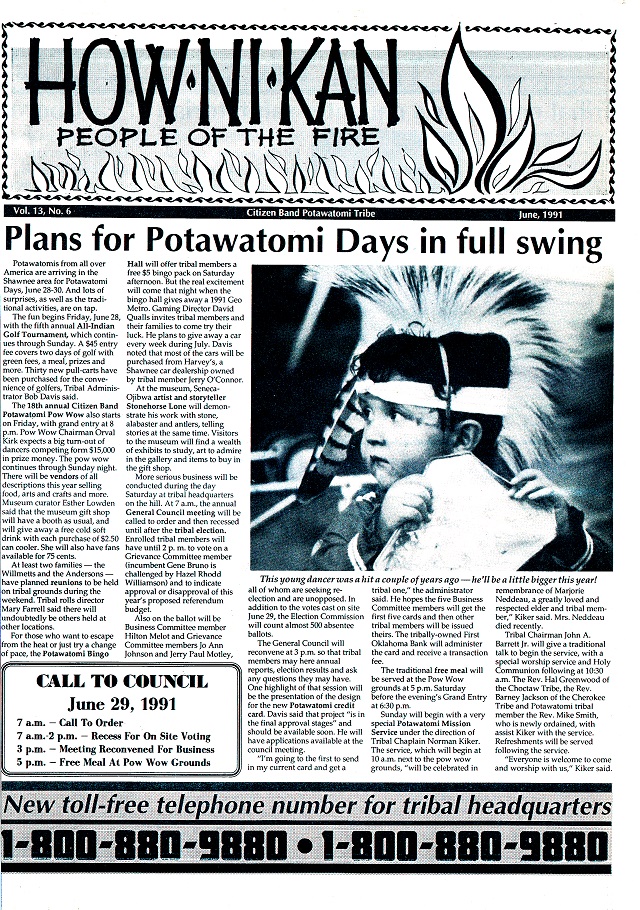 1996
The June 1996 How-Ni-Kan promoted the upcoming event by advertising a new tribal activity to the roster of events taking place at that year’s “Potawatomi Pow-Wow.”

“While Potawatomi children learn about their culture and traditions during the 23rd annual Pow-Wow June 28-30, their parents can explore cyberspace by surfing the Internet in the tribe’s new computer lab. Tribal administrator J.D. Colbert said that half of the computer lab will be available to tribal members on Saturday morning during Pow-Wow for those interested in exploring the World Wide Web.” 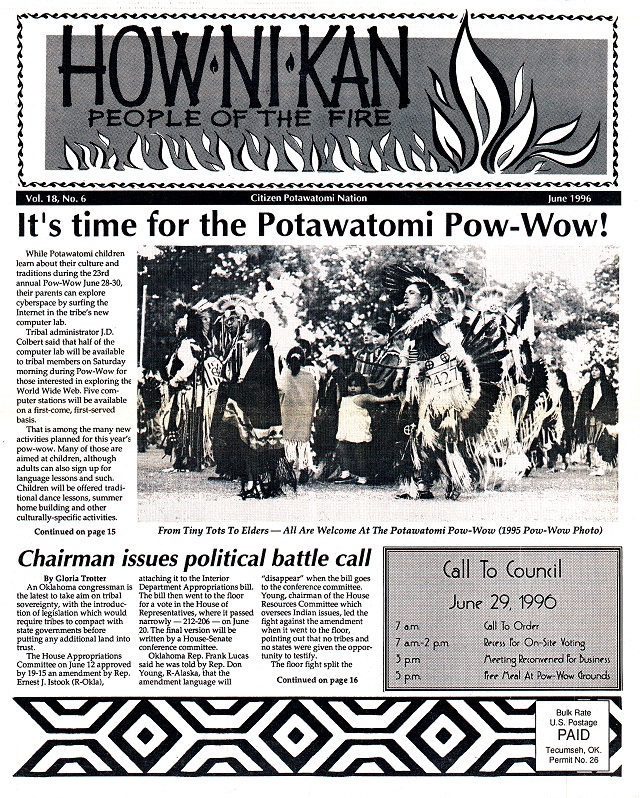 1998
Page 15 of the June 1988 How-Ni-Kan chronicled the winners of what would be the final year of the original Potawatomi Intertribal Powwow. Interestingly of note, in more than 18 divisions of men’s and women’s dance competitions, only one Potawatomi, Charles J. Duncan of Meeker, Oklahoma was listed amongst the top winners.

1999
An April 1999 edition of the tribal paper pronounced the official beginning of a new tradition at Citizen Potawatomi Nation, the CPN Family Reunion Festival, which would begin in June 1999. The genesis of this shift towards a CPN-centric event began in 1998. During the previous year, the Nation hosted a one-night powwow exclusively for Citizen Potawatomi members.

Tribal Chairman John Barrett noted the change in that same issue of the tribal newspaper, writing “I was on the Business Committee when we had our first intertribal pow wow back in 1972. The thought at the time was to have an intertribal pow wow to get us started in our own traditions – since we had no drums, no singers and no dancers. We were supposed to learn our own ways, after we learned from other tribes, and then teach our people…Here we are 27 years later, and we have yet to have more than five Citizen Potawatomi competition dancers enter a contest at our own pow wow.”

Chairman Barrett also addressed the name change, explaining “’Festival’ is the word favored by the Business Committee to signify a new celebration of family – which is what we are.”