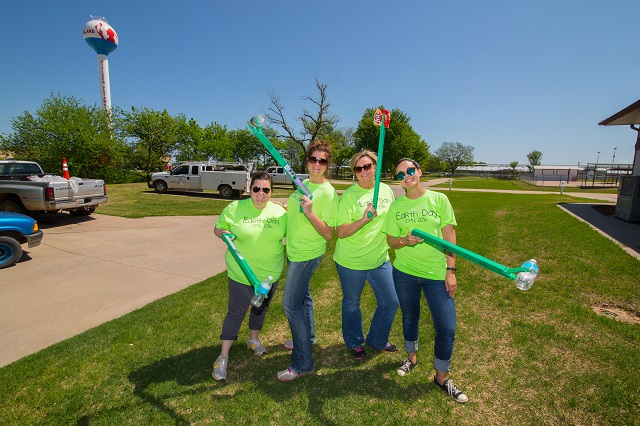 Earth Day has become a seminal event around the world, with April 22, 2016 marking the 46th anniversary of the movement that channels efforts towards environmental issues. Tribal nations are amongst the country’s foremost leaders in many Earth Day activities given their unique responsibilities as sovereign entities. Citizen Potawatomi Nation is no different in that regard, and tribal employees from across the Nation’s departments and enterprises work to clean up areas inside the tribe’s jurisdiction.

“We care about the environment, but also the citizens of the community,” said Tim Zientek, CPN director of housekeeping and emergency management. “As concerned members of the communities in Pottawatomie County as well as it being an important part of our culture as a native people, the Nation believes that we all must do our part to protect what has been given to us here on Earth.”

This year, a total of 44 tribal employees, along with participants in the FireLodge Tribal Youth Program, split into four-person teams for cleanup duties on tribal properties. In just one morning, the teams covered approximately four square miles of roadways in the tribal jurisdiction and picked up roughly 20 cubic yards of trash.

“As an environmental protection professional, Earth Day is a great opportunity to get the word out about cleaning up the Nation and prevent littering,” said CPN Energy Sustainability Specialist Tara Hammer. “It helps ‘reboot’ peoples’ thinking about Mother Earth in terms of waste when it comes to throwing something in the trash or recycling.”

It is not all just cleaning up though; part of the CPN effort involves educating the next generation. Members of the CPN Department of Environmental Protection taught students at the CPN Child Development Center through a series of activities what was a recyclable and what was not. The youth at the CDC also built bird houses to encourage further engagement between the students and Mother Nature.

“The damage caused by humans can only be repaired by us. By doing our part in helping to clean up the environment we hope to not only slow down the damage that has already been done, but also make the community cleaner for all to enjoy,” noted Zientek.

If you would like to learn more about the work of CPN tribal members and employees when it comes to environmental protection, please visit http://cpn.news/earthday2016.