Students from the CPN Child Development Center took first place for their performance of the Potawatomi Morning Song at the Oklahoma Native American Language Fair hosted by the Sam Noble Museum and the University of Oklahoma.

For the past four years the Citizen Potawatomi Nation Child Development Center staff has sent one of their classes to the event. In the first year they went CPN students took third place in the large group traditional category. However, in the past three years, they have won first place.

CPN Language Director Justin Neely organizes and teaches the kids ahead of the event in afternoon classes at the child development center. The students began practicing in January, learning a new verse of the song each week. 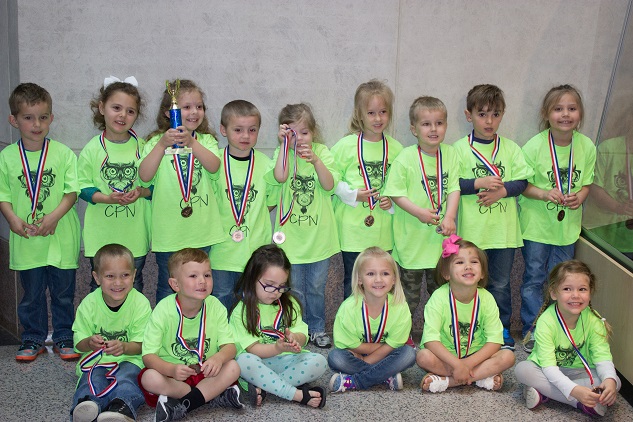 The Potawatomi Morning Song is a song about getting out of bed, giving thanks to the day and the spirituality involved with speaking the Potawatomi language.

“The kids had really nice harmony this year,” said Neely. “It can be hard for that many young children to sing in unison, but they all did a wonderful job. The whole idea with the language fair is a wonderful event. It helps promote the language and is a really positive event for the kids.”

The event is one of only a few of its kind throughout the United States and children from many different tribes participate.

To Neely and Littlehead, it’s important that children learn their language and culture. Incorporating the language in teaching the children also brings in their parents, many of whom want to learn Potawatomi as well.

“The best feedback we get comes from the parents telling me that their kid is speaking Potawatomi at home,” said Neely. “It’s that intergenerational cultural transmission that let’s me know these kids are really learning the language. Teaching the kids at this age can give them a sense of identity as Potawatomi so as they get older they can carry the culture into the future.”

For those interested in learning more about the Potawatomi language please refer to their webpage at www.potawatomiheritage.org/#language.