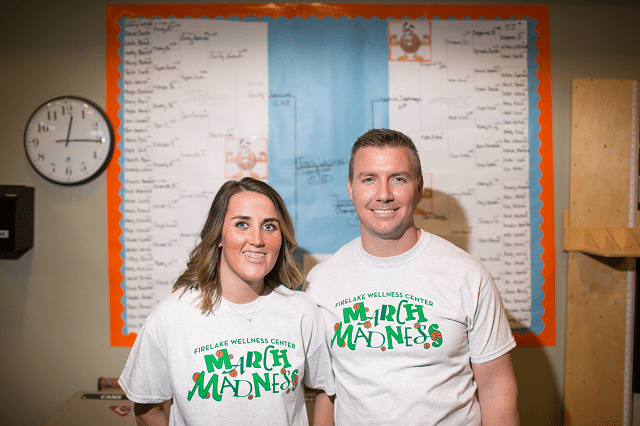 Each year, you can feel the anticipation building at FireLake Wellness Center as the March Madness fitness challenge rolls around.

The contest was set up like the NCAA basketball championship bracket and went for six weeks, beginning in March. This year we had 64 participants, including 32 women and 32 men. Each person competes against his or her opponent for 90 minutes per week. The person who racks up the most miles on the treadmill, arc trainer and stationary bike by the end of the week goes onto the next round of competition. To make all the pieces of equipment equitable, the Tecumseh High School math department came up with the equations.

When we began the challenge 11 years ago, we required competitors to work out five hours per week. Because that is a lot of pounding on the joints of participants, we have changed the contest to 90 minutes per week, which can be broken up into 15-minute increments, which produced some of the best results we’d ever seen this year.

The female winner was tribal member and FireLake Wellness Center employee, Emily Ledinski. The runner-up was Mindee Duffel, who works in the CPN Education Department.

James Bailey, who is a physical therapist at FireLake Wellness Center, won the male side of the bracket. The runner-up was Cheyenne Deathridge, who won the competition last year.

Ledisnski and Bailey both won a $250 gift card to Dick’s Sporting Goods.

If you’d like to learn more about the classes and services of FireLake Wellness Center, visit http://cpn.news/flwc or email me at skessler@potawatomi.org.