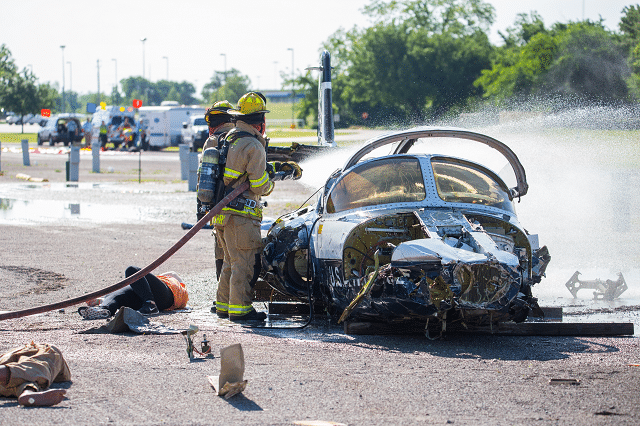 Preparing for the worst is what emergency responders do best, and a recent exercise held at the Citizen Potawatomi Nation gave local rescuers an opportunity to hone the skills they’ll need when disaster strikes. On May 12, the Pottawatomie County Local Emergency Planning Committee organized an exercise at the FireLake complex to train the local first responders how to best respond to a plane crash.

The exercise scenario involved a Boeing E-3 Sentry, commonly known as an AWACS. Tinker Air Force Base loaned a T36 trainer aircraft for the exercise. The ground around the plane was soaked in a liquid to symbolize the leaking of jet fuel from the crash site, which exercise director Lt. Chad Larman of the Tecumseh Fire Department said would help train first responders on how to handle hazardous materials properly.

“We are trying to train the local fire departments on hazmat incidents as far as plane crashes go and life safety skills,” Larman said. “We decided to do a plane crash this year to get stress levels up in order to evaluate the participants better.”

Another focus for participants was to properly care for the victims of a plane crash. Seven Gordon Cooper Technology Center nursing students participated as the patients needing treatment from their injuries in the in the crash.

Tim Zientek, the director of emergency management at CPN, was on the event’s planning team. His role was to make sure that participants remained safe and were well equipped to handle large incidents like a plane crash.

“Coming together to accomplish a common goal in an incident as big as this is what it’s all about,” Zientek said. “We have first responders here to learn and train together so we can use each other’s assets if a situation like this were to ever occur.”

Each year, local emergency managers from the Pottawatomie County Local Emergency Planning Committee come together to organize a large scale exercise on response scenarios for their respective agencies. Last year the exercise included a chlorine spill and these teams trained how to best contain and remove of hazardous chemicals. 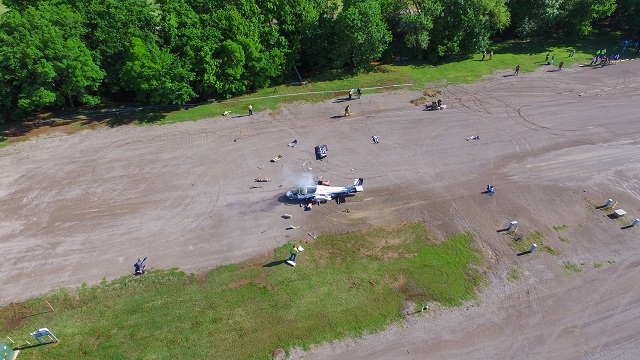