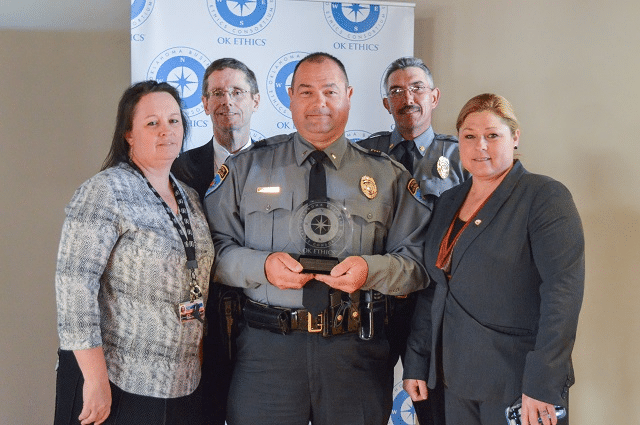 The Oklahoma Business Ethics Consortium’s 2016 OK Ethics Statewide Awards recognizes businesses, nonprofits and government entities whose efforts promote Oklahoma values and positively impact its communities. In the category of community impact, the Citizen Potawatomi Nation Tribal Police Department was honored for its influence in the communities it serves in Pottawatomie County.

In a letter recommending the department’s nomination for the awards, Pottawatomie County Sheriff Mike Booth wrote that “as the elected sheriff of Pottawatomie County, my office and deputies work hand-in-hand with the CPN police department on a daily basis. Their commitment to an ethical community policing program has benefitted all the people of the county who are sworn to protect and serve.”

The purpose of these principles is to help tribal police officers, who in many cases operate as southern Pottawatomie County’s primary first responders, protect and serve the diverse populations and properties of a largely rural jurisdiction. Tribal police officers must also mindfully navigate diverse cultural and economically challenged populations during their shifts, making a cogent set of operating principles key in maintaining trust and cooperation with the people they serve.

“The CPNPD’s focus on engaging all members of the communities we patrol has been beneficial for their officers and our own,” wrote Tecumseh Police Chief Gary Crosby. “When one makes a traffic stop or responds to an emergency call, they know that a sister-agency will be there immediately as back up. This trust has also trickled down to the citizens in our town, who often see tribal police officers as trustworthy as those of the Tecumseh Police Department.”