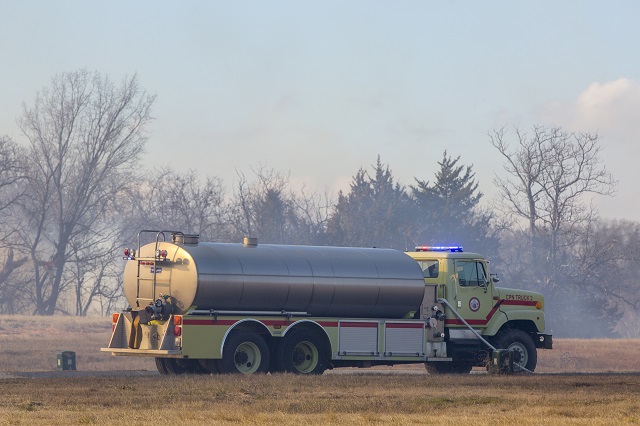 Firefighters across Oklahoma would likely tell you that conditions in the state are the perfect kindling for wildfires. The eastern red cedar, which is native to Oklahoma, and the dry and windy conditions present throughout the year mean that emergency responders must be prepared at all times. Already this year crews battled a wildfire in Oklahoma and Kansas which burned more than 400,000 acres, the largest wildfire in Kansas’ history.

“This summer Oklahoma is expecting a drought,” said CPN Emergency Management Director Tim Zientek. “After spring, the grass and foliage can burn up from the severe heat in the summer but you never know what to expect. We have to be ready all year round because wildfires can occur at any time of the year here.”

CPN employees assist other fire crews and help fight these wildfires throughout Pottawatomie County. Zientek heads up the response effort and has been a driving force in the creation and training of the CPN Volunteer Fire Department.

“Each year Pottawatomie County is affected by several large wildfires,” said Zientek. “It’s in our best interest to have people ready and willing to help fight these fires. Every time we go out as a crew we are always thanked for being there to help other emergency teams and fight the fires.”

CPN volunteer firefighters come from the ranks of tribal employees, including Nick Nadeau the assistant director of safety and housekeeping, Major Jody Opela and Officer Mike Mckechnie of the CPN Tribal Police. The crew has multiple responsibilities, including assisting other emergency management crews when they respond to fires and other emergencies. Though they aren’t often called upon to be on the front lines of the blaze, the CPN volunteers can deliver up to 12,000 gallons of water with CPN’s water tanker trucks.

All of the surrounding fire departments have fire tanker trucks, but Zientek and his crew provide backup water and other supplies.

“The volunteer firefighters at CPN have a really quick response time,” said Lieutenant Chad Larmin of the Tecumseh Fire Department. “Anytime we have a structural fire or wildfire we call them. Their 5,000-gallon tanker has helped us time and time again and we’re thankful for our partnership with them.”