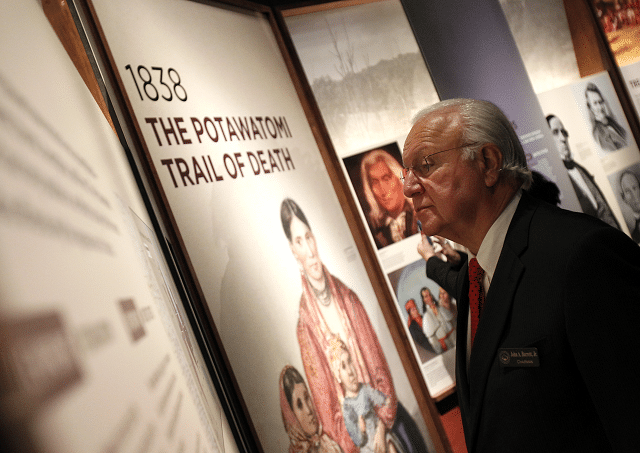 “The history of U.S.-Indian treaties is the history of all Americans,” said Kevin Gover, director of NMAI. “We cannot have a complete understanding of what it means to be Americans without knowing about these relationships, whether we are Native Americans or not.”

The treaty on display was signed on August 5, 1836 at the Yellow River in Indiana. The treaty between the federal government and the Potawatomi people was a repeal of the 1832 peace treaty, which promised that the Potawatomi people could keep their land in northern Indiana. The United States broke the 1832 agreement and forced the Potawatomi to sell their reservation land for $14,080 and move west. Many Potawatomi refused to move, but ultimately the federal government would send them on a forced march to their new reservation in Kansas. This forced removal became known at the Trail of Death.

“This treaty is significant because it was the treaty that was used as the excuse for the removals from northern Indiana, including the Trail of Death, even though several of the chiefs never signed this or any other removal treaty,” said Kelli Mosteller, Ph.D., director of CPN Cultural Heritage Center.

“Nation to Nation” presents the history of the relationship between the United States and American Indian Nations through their treaties in the largest historical collection ever offered to an audience. Nine original treaties on loan from the National Archives will be displayed for six months during the four-year run of the exhibit.

As the tribe who has signed more treaties with the U.S. government than any other, Potawatomi Nation will have two original treaties represented. The treaty between the Potawatomi and the United States from 1809 will also be displayed from August 2017 to January 2018.

“I hope that visitors to the exhibit leave with a better understanding of how complicated and destructive the treaty era was for tribes,” Mosteller said. “From beginning to end, a visitor can see colonial and federal government relations with tribe’s transition from one of negotiations between sovereign nations, to one of U.S. federal domination on every aspect of life for Native peoples.”