Working together is rarely a difficult prospect for the Citizen Potawatomi Nation and the American Red Cross. In recent years, the two have partnered on severe weather preparedness projects that resulted in the construction of storm shelters for tribal members, and they have worked hand-in-hand in disaster recovery efforts like the 2013 spring storm cleanup in Pottawatomie County. 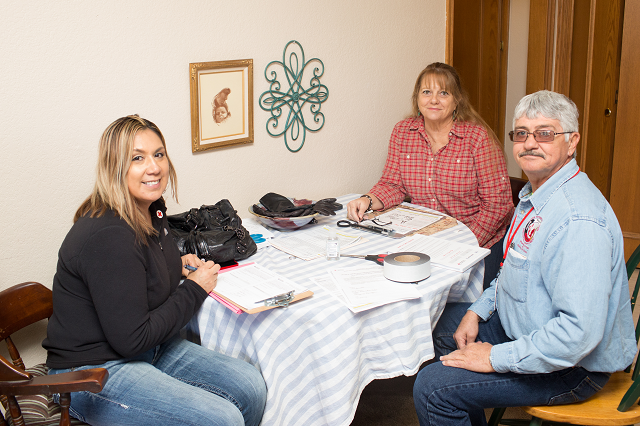 In early 2016, the two service providers again teamed up for the “Home Fire Campaign” for tribal housing residents living in the CPN jurisdiction. CPN and the Red Cross of Central Oklahoma held training sessions in early January to instruct personnel on how to inspect and install smoke detectors at tribal member residences. The Red Cross initially approached the Nation about the program, a first of its kind effort between the ARC and a tribal government.

Residential fires remain a common plague despite being largely preventable. According to the latest statistics from the National Fire Protection Association, more than 369,000 home fires killed 2,755 Americans in 2013. An additional 12,000 were injured in those same blazes, which caused an estimated $6.8 billion in damage.

“Eventually we plan on supplying 750 homes with new smoke detectors, but we’ve already installed around 688,” said CPN Emergency Management Director Tim Zientek. “Our trained personnel will also work with residents to come up with an evacuation plan in case of an emergency as well as educate homeowners on home safety.”

Though fires, deaths and injuries caused by them continue to fall statistically, the prevalence of such a preventable problem is vexing. Nearly half are caused by cooking accidents, while heat-related fires are the second most prevalent.

“It is vital to have a plan and to address potential causes before they become a problem,” explained Zientek. “Our trained teams know what to look for when entering a residence in terms of what is hazardous and could cause a structure to catch fire. Even if the worst strikes, the evacuation plan is key to surviving a fire unscathed.”

This prevention is also vital for emergency responders like Zientek, who also leads the Citizen Potawatomi Nation Volunteer Fire Department. Once a structure is on fire, emergency responders are on the front line of rescue and fire control operations. In 2014 alone, 56 volunteer firefighters died while acting in the line of duty according to the U.S. Fire Administration.

For Zientek and the partners at the American Red Cross, each evacuation plan and smoke detector lessens the chance of having to respond with a fire truck. Tribal housing properties and foster homes in the Shawnee, Oklahoma and Rossville, Kansas areas are being served by the installation teams, and the effort will continue until the supply of smoke detectors is exhausted.