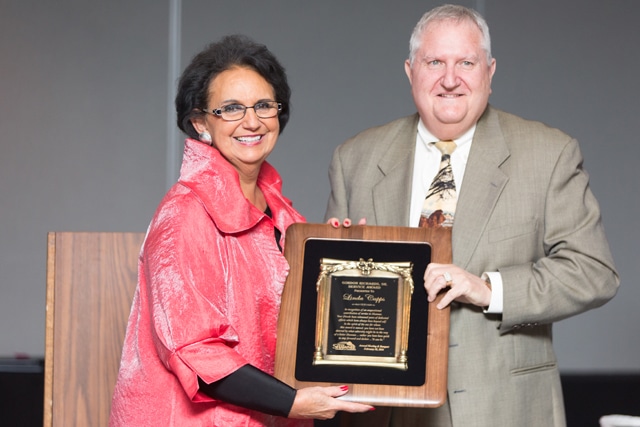 Longtime Tribal Vice-Chairman Linda Capps was honored with one of Shawnee, Oklahoma’s most prestigious public service awards on Feb. 18 at the Shawnee Chamber of Commerce annual meeting. For her long service to the local community, Vice-Chairman Capps received the Gordon Richards, Sr. Service award.

The award is dedicated to longtime Shawnee resident and founder of Richards’ Drug Store, Gordon Richards, Sr. It is awarded to citizens who have more than ten years of service to the community and have demonstrated their ability to overcome adversity, contribute to the development of local youth and been active in local political and civic affairs.

“I am so honored to receive the Gordon Richard’s Sr. award,” said Capps. “Many of my friends and family were in attendance, plus several of my former students who I had not seen for years. It was, indeed, a very special evening for my family and me….one that we will always remember”.

On hand to present remarks was Tribal Chairman John “Rocky” Barrett, who spoke at length of his longtime vice-chairman’s dedication to the people of Shawnee.

“I could not think of a more deserving individual than my friend and colleague Linda Capps,” said Chairman Barrett. “I knew the man that this award is named for, and he was a pillar of this community. Linda is equally so, and it is a great honor for me to tell you of all the good she has done for all of us in our community.”

Born just down the road in the community of Harrah, Oklahoma, Capps began her professional career as a business teacher at Dover Public Schools. In 1977, she moved to Tecumseh Public Schools, where for seven years she taught business and served as the district’s Indian education director. She also served for a decade at the Oklahoma Bid Assistance Program and as an adult education instructor at Gordon Cooper Technology Center in Shawnee, Oklahoma.

In addition to her educational service, Capps has served as the vice-chairman of the Citizen Potawatomi Nation since 1990. During her tenure with Chairman Barrett, the Nation has increased its assets at an incredible pace, and today is the largest employer in Pottawatomie County.

She has served on the board of directors of numerous institutions, including the Federal Reserve Bank branch of Oklahoma City,
Rural Enterprises of Oklahoma, Inc., Gordon Cooper Technology Center Foundation, the Foundation Board for Seminole State College and First National Bank and Trust Co., the largest tribally-owned bank in the United States.

Though she was honored with one of the evening’s premier awards, Vice-Chairman Capps again reflected its criteria by expressing
her happiness at seeing the graduating class of the Leadership Shawnee program. Amongst those graduating were CPN Education Director Tesia Zientek, FireLake Discount Foods Director Richard Driskell, FireLake Discount Foods Manager Michael Lester.

“That was impressive,” said Vice-Chairman Capps. “. I was very proud to have so many tribal members and employees involved during the evening.”