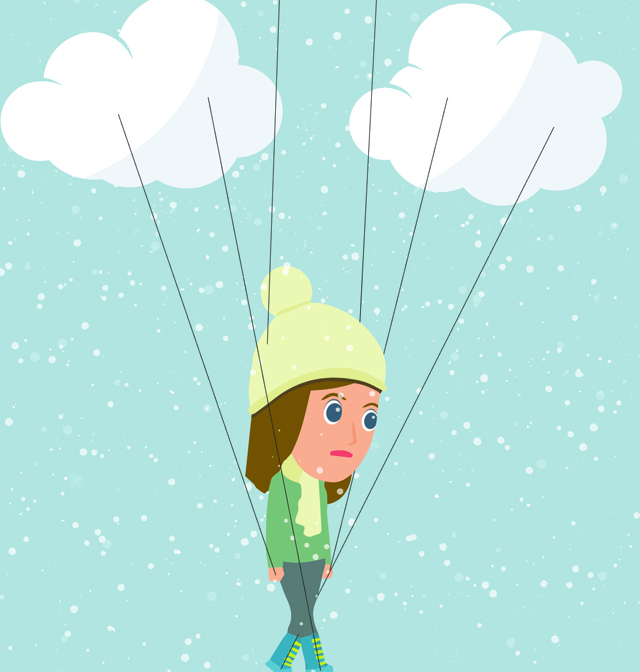 April is not the cruelest month for Jason Tuesday.

A First Nations resident of Winnipeg, Manitoba, Tuesday was diagnosed with seasonal affective disorder (SAD) in 2013 after he and his doctor noticed a pattern of his emotional well-being nose diving around the same time each year.

An estimated 3 million Americans and 2.1 million Canadians struggle with seasonal depression annually. According to a 2005 study by Kathyrn Roecklein and Kelly Rohan, up to 20 percent of all recurring cases of depression are seasonal. Although it is possible to experience SAD during the spring or summer, it is more prevalent in winter months due to less daylight. That prolonged darkness can set off a physiological chain reaction in the body, starting with impacting some of the body’s basic rhythms and eventually influencing brain chemistry.

“The circadian rhythm gets messed up due to lack of sunlight,” said Terri Goodwin, a behavioral therapist for Citizen Potawatomi Nation in Shawnee, Okla. “It gets you all out
of whack and messes up your internal clock. When that happens, your serotonin and melatonin levels drop, which affects your sleep cycle and impacts mood.”

Among the populations more likely to develop SAD are women, people younger than 55 years old, those with a family history of SAD and those who live in northern locales,  where there is not as much sunlight during the winter months.

The more common symptoms of seasonal affective disorder include:

As Goodwin pointed out, a SAD diagnosis requires that the symptoms appear and disperse at approximately the same time each year for two or more years, in order to differentiate it from a major depressive episode.

“Most of the symptoms are pretty much the same,” she said. “It’s a matter of how long they last, when they show up and whether it’s present at just one time of year.”

To combat that lack of sunlight, some patients turn to light therapy. Used either alone or in tandem with other treatments, a light therapy session involves sitting or working close to a bright artificial light box for a set amount of time. Depending on the intensity of the fixture involved, a single session can last from 30 minutes with a 10,000 lux light – the equivalent of spending 30 minutes outside on a sunny day – to two hours with a 2,500 lux light. In comparison, the lighting in an average bedroom ranges from 300-500 lux. Patients often adopt light therapy sessions as part of their morning routine in order to maximize the treatment’s impact during the day. Although many patients are asked to face the box in order to increase its effectiveness, looking directly at it is strongly discouraged, due to its potential harm to the eyes.

Despite showing some success in as little as two weeks in research studies, the U.S. Food and Drug Administration does not regulate or test light therapy boxes. Potential side effects may include eyestrain, headaches and insomnia, if the session is conducted later in the day. The Diagnostic and Statistical Manual of Mental Disorders classifies SAD as a subset of depression, and several pharmaceutical options used to treat major depressive episodes have also been shown to be effective in SAD patients.

On the medication side, the FDA has approved the use of extended release bupropion, marketed as Wellbutrin and Zyban, as an option for SAD patients since 2006. Paxil, Prozac and other selective serotonin reuptake inhibitors, which shift the brain’s serotonin balance, have also shown to be viable treatment methods, both alone or used in conjunction with counseling or light therapy. For Tuesday, mindful meditation and stepping back from time to time have helped him cope when December rolls around. He has also found some peace through group sessions with other men who are struggling with depression, but the challenge is still there.

Although he has opened up more to friends and family about his mental health status, he allowed his phone to be temporarily shut off earlier this winter simply because he did not want to deal with people.

“For me, January’s usually a little better,” he said. “It’s brighter. But getting through December without acting out is an achievement.”